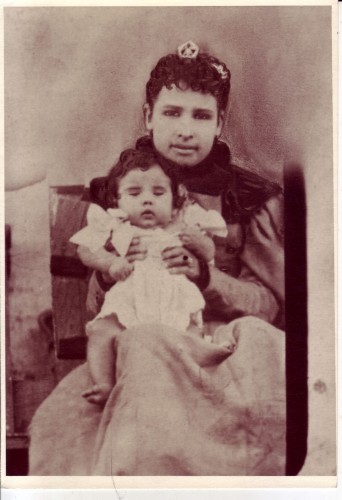 My great-uncle Carlos Ysidro Alvarado was born 15 May 1897 in Ensenada, Baja California. He was baptized 27 Oct 1897 in the Iglesia Todos Santos (Church of All Saints) in Ensenada. He was the second child of José María and Jesús Alvarado.

Two years later the family moved to Los Angeles. The Alvarado family landed in Sonora Town, the section of the city where the original Mexican populace had been segregated by the new Anglo residents. At the time, no one in the family spoke English; José María supported the family as a day laborer, according to the 1900 U.S. Census.

I’ll have more to report on Sonora Town later, but suffice to say it was characterized by saloons and brothels. José María and Jesús no doubt felt it was not a good place to raise children. In fact, Sonora Town was, like most poor areas, ridden with disease; their daughter Bernabea Beatríz (11 Jun 1896-24 Sep 1900) died there shortly after they arrived at the age of four.

José María and Jesús must have been amazing people. They not only got their family out of Sonora Town within five years, but they steadily improved their family’s position over the next 20 years to the point where they had a ranch, home and store (Alvarado Mexican Merchandise on the corner of Fourth Street—today’s Magnolia Boulevard—and Craner) in the San Fernando Valley and a second home downtown at 543 1/2 Fremont Avenue between Fifth and Sixth Streets. 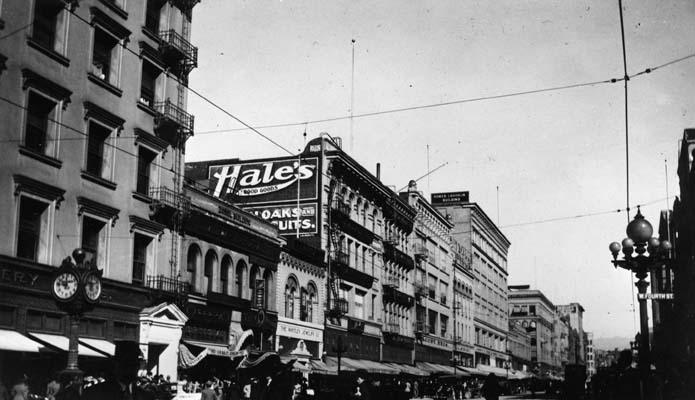 On his draft card for World War I, Carlos was described as short, medium build with dark brown eyes and black hair. He claimed an exemption as he was supporting his father, mother and two sisters (my grandmother María Lucia and her sister Cecilia Anastasia). He was employed as a show card writer at Hales, 341 S. Broadway. 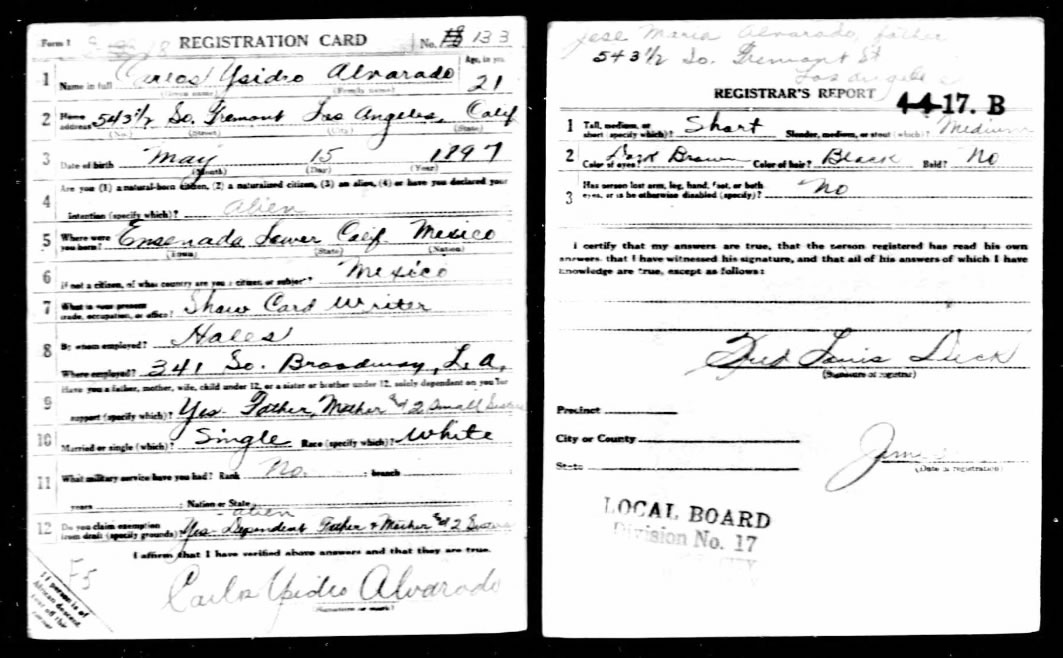 The date on the draft registration card is June 15, 1919. Which is most assuredly wrong. 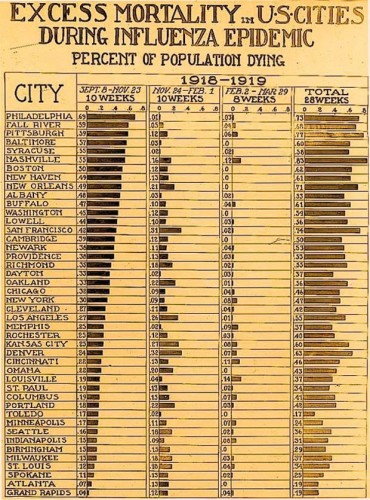 It’s wrong because Carlos became a victim of the Great Flu Epidemic of 1918 on 5 Jan 1919. He died at the age of 21 and was buried in an unmarked grave  in Hollywood Memorial Park, today Hollywood Forever Cemetery on Santa Monica Boulevard in Hollywood, near the grave of his father, who would follow him to the cemetery a year later. His death certificate was signed by Dr. Cecilia Reiche, the long-time family friend (and, we are told, one of the first woman graduates of the medical school at USC) and confidant of Jesús who also delivered my grandmother María Lucia and my aunt Cecilia Anastasia. 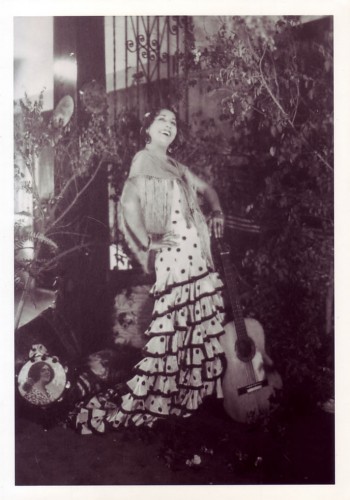 Both my grandmother and my aunt always used to praise the artistic talent Carlos demonstrated. My grandmother, who was herself a painter, was in awe of Carlos’ gift, and my aunt, when asked about Carlos in her 99th year, would always smile and say “He was an artist.” There does appear to be an artistic gene; I am a web designer and my cousin Daniel Brice is a well-known contemporary artist. And of course our great-aunt Jovita García (7 Mar 1893-28 Jan 1984) was a dancer in silent movies, who apparently rehearsed with Rudolph Valentino for his famous tango scene in “The Four Horsemen of the Apocalypse.”

I’ve always wished I could see some of Carlos’ work. And because of the tragedy of his early death, I became interested in his life. The details were so scarce. We have no adult photo of him, only one image of him as a baby in his mother’s arms. Carlos became for me a figure larger than life, dashingly handsome, his dark eyes shaded by thick jet-black hair, an elusive smile, artistic, ambitious, the life of the party.

I was left with a few shards provided by the documents. He was a show card writer at Hales, 341 S. Broadway. 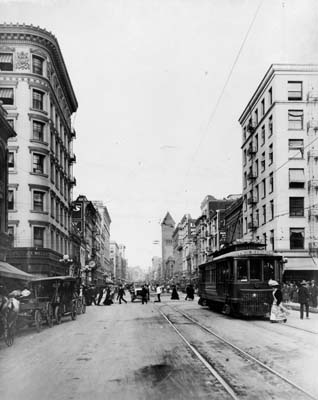 A show card writer was the equivalent of today’s display merchandiser in a retail store. Carlos would, with brushes and special pens, create the promotional posters at J. M. Hale Company, an early Los Angles retailer. J. M. Hale was Marshal Hale, one of the Hale Brothers who became a San Francisco retailing legend with their store on Market Street. You can see photos on the web of that store in ruins after the Great Earthquake and Fire of 1906.

While his brothers concentrated on San Francisco, Marshal Hale began an empire in Los Angeles. From before the turn of the century, his store, J. M. Hale Company, was located on Spring Street near First Street. On 5 Nov 1906 the Los Angeles Times reported that the J. M. Hale Company was moving to a new, larger location at 341-435 South Broadway. At the time, the city’s retailers were all undergoing a southward migration along Broadway, Spring and Olive until they reached Seventh Street as the retail Golden Era of Los Angeles, when that street became a mecca for all the finest things the city had to offer in the glamourous environs of Bullock’s, Robinson’s, Barker Brothers. 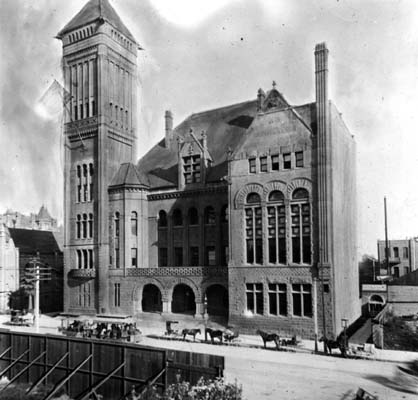 But the future of Marshal Hale’s enterprise lay a block south of his store. It was the legendary Broadway Department Store, founded in 1896 by Arthur Letts. It was their new location at 401 S. Broadway, built in 1912 and designed by the prolific Los Angeles architects Parkinson and Parkinson. Broadway was then a magnificent thoroughfare; the Old City Hall is visible in photographs towering above the street with its pyramidical tower. Later in the years after World War II, Broadway would become a shimmering center of nightlife, with the nation’s greatest concentration of movie palaces.

Marshal Hale died in 1936, but the company he and his brothers founded coveted The Broadway Department Store. In 1950 they obtained it, becoming Broadway-Hale Stores. But they unwittingly set into motion a domino effect that would change the face of department stores in the United States.

The great local department stores of Los Angeles were The Broadway, Bullocks, May Company and Robinson’s. Bullock’s and Robinson’s catered to the moneyed class, while The Broadway and May Company were mid-market. Robinson’s had begun along Broadway as The Boston Company, and Bullock’s in 1907 at Seventh and Hill. I still remember shopping at the massive original Bullock’s store downtown, with its venerable wooden escalator. It had a little cafe on an alley called St. Vincent’s Court, which was the location of the original Vincentian college of Los Angeles.

A reign of acquisition followed. Broadway-Hale Stores became Broadway, then Carter–Hawley-Hale. They would continue to swallow regional chains, including the highly-coveted Neiman-Marcus of Dallas. Meanwhile Robinson’s had been acquired by Associated Dry Goods, which was eventually subsumed into The May Company. 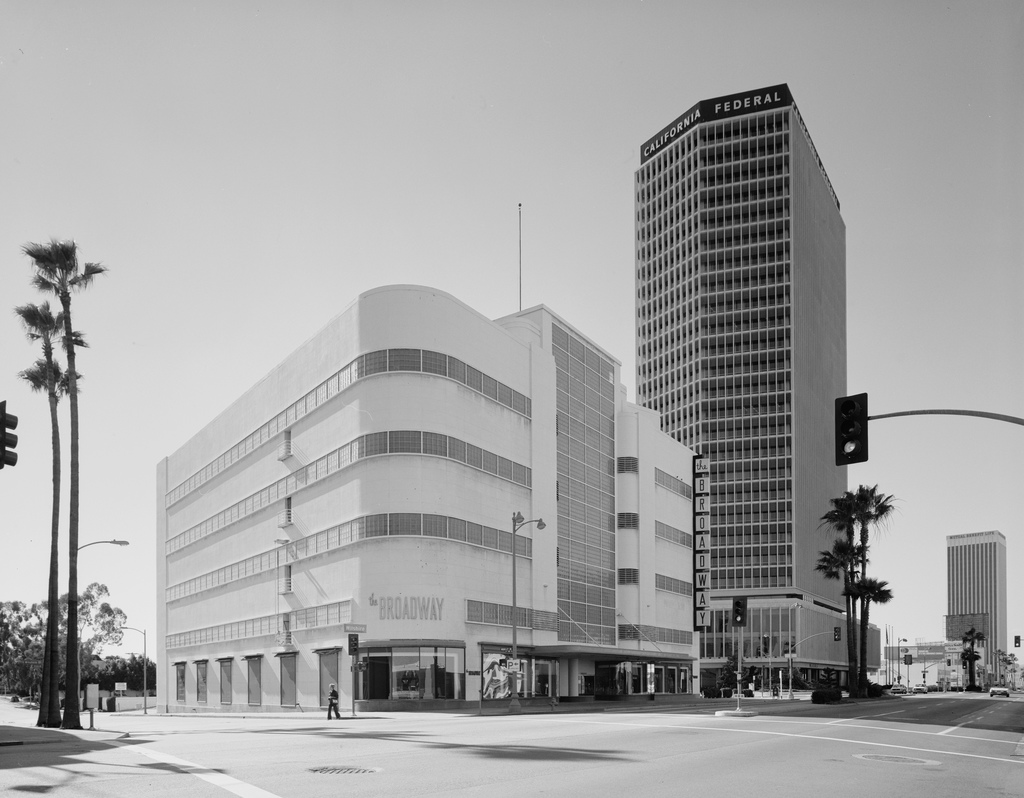 At the same time, Bullock’s was expanding, eventually acquiring the prestigious I. Magnin of San Francisco. They became Federated Department Stores, and added to their portfolio such chains as Chicago’s Marshall Field, Filene’s of Boston, Rich’s of Atlanta, Burdine’s of Miami and Foley’s of Houston. When I worked for Bullock’s during college, this was the company I was proud to be a part of. One of the stores I worked at was Bullock’s Beverly Center. The Broadway there was the successor of The Broadway Wilshire, a Streamline Moderne masterpiece which was town down in a rush and remained an empty pit for 30 years at the end of the street where I now live. 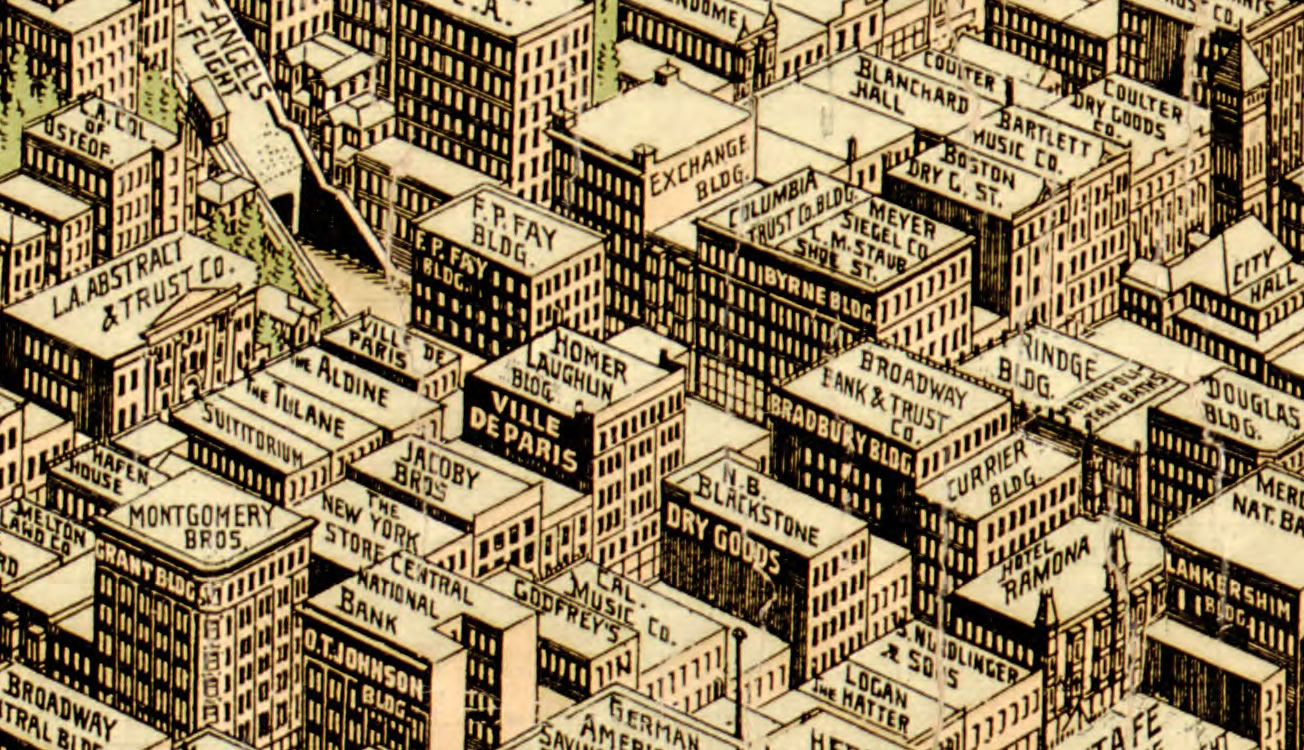 A glimpse of a 1909 map of Broadway shows many pioneer department stores; Coulter’s that would eventually become part of The Broadway, Boston Dry Goods, which would become the glorious Robinson’s, J. M. Hale Company (between Jacoby Bros. and Ville de Paris—apparently they did not pay the mapmakers to include their name).

I assume Carlos must have met Marshal Hale while working at J. M. Hale Company on Broadway. Probably Hale thought nothing of Carlos, but I wonder what Carlos thought of Hale. Did Carlos see in him a singularly rapacious character, a representative of a culture of acquisition that would eventually destroy the nation’s great department stores? Or did Carlos simply go about his job, creating beautiful things day to day, and think Hale was a jerk? Carlos was an artist. I’m sure he had some sense of excitement at the birth of the modern department store. I wonder what he would think of its demise.

I tried to reach Bob Rutan, Macy’s archivist in New York, to learn more about the J. M. Hale Company and the history of Los Angeles’ great department stores, but he never responded. Imagine that.