Youth, as they say, is wasted on the young. And while you’ve got to love having non-conformist ancestors, sometimes their adventures make it difficult to track them.

Case in point: my grandmother María Lucia “Lucille” Alvarado Wood Dunham Minasian. She was quite a handful, especially once she met up with my grandfather Sumner Earl Dunham (b. 23 Apr 1899 in Fort Bragg, Mendocino County, d. 22 Apr 1964 in Lynwood, Los Angeles County). They were known to spend all night dancing in the great ballrooms of Santa Monica. And I had already discovered something of their bohemian attitude in the 1930 Census when they gave their names as “Stanley” and “Lorraine.” Oh, it was them all right; the ages and kids’ names gave them away.

But I could never find their marriage record. Were they so counter-cultural that they never bothered to get married? That was my suspicion for a while, until I reviewed some genealogy work done by my cousin Jan-Christine Johnson many years back. She had a note that they were married in San Bernardino. So I requested a marriage certificate from the San Bernardino County Clerk, just to see what would happen. 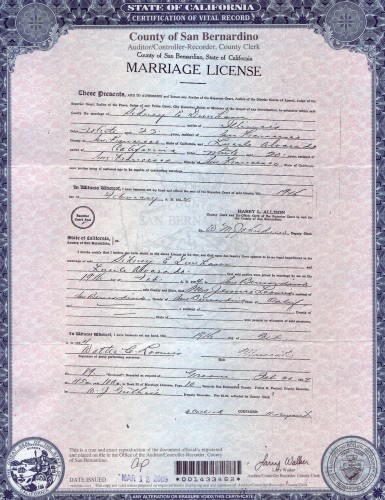 Amazingly, someone in the County Clerk’s office made a guess and sent me the right certificate. Again with the aliases. The certificate was for “Sidney E. Dunham” and Lucile Alvarado. “Sidney” said he was born in Illinois and lived in San Francisco. Lucile also claimed to be a resident of San Francisco. Luckily my grandmother used her real name and the year is right: February 14, 1924. Valentine’s Day.

I can just see Sumner Earl and Lucille getting married on the spur of the moment on Valentine’s Day 1924, probably on an impromptu road-trip to San Bernardino, all googly-eyed and laughing, making things up as they went along, giggling. It’s kind of endearing, really, and certainly tells me something about their relationship. But Grandma, Grandpa, seriously: what about your poor grandson trying to get the records straight? I hope they’re having a good laugh together right now.

They’d probably tell me to loosen up, or however the young kids said that in 1924.