We all knew about the eight children my great-grandparents Ludwig Josef “Louis” Stolz (1866-1958) and Apolonia Luján (1872-1929) raised in El Paso. One of these children, Louis Gustave Stoltz, died in 1928 at the age of 30. The other seven are the progenitors of the California and Texas branch of the Stoltz family, while my great-grandfather’s siblings all remained in the north in a swath stretching from Minnesota through North Dakota, Montana and Washington.

The State of Texas has digitized and made available online decades of death certificates. Through this rich treasure of documentation I was able to find information about Louis and Apolonia and almost all of their children, including another two our family was not aware of; a girl born in July 1913 who lived only a week, and a boy stillborn in 1915.

Somewhere along the way I discovered a birth record for twin boys born to Louis and Apolonia on February 26, 1905. The birth was at their home at 4th and Tays, and the twins were unnamed. In the place for the name the doctor, Howard Thompson, had written “Infants Stoltz” and noted that they were “Born alive (Both).” 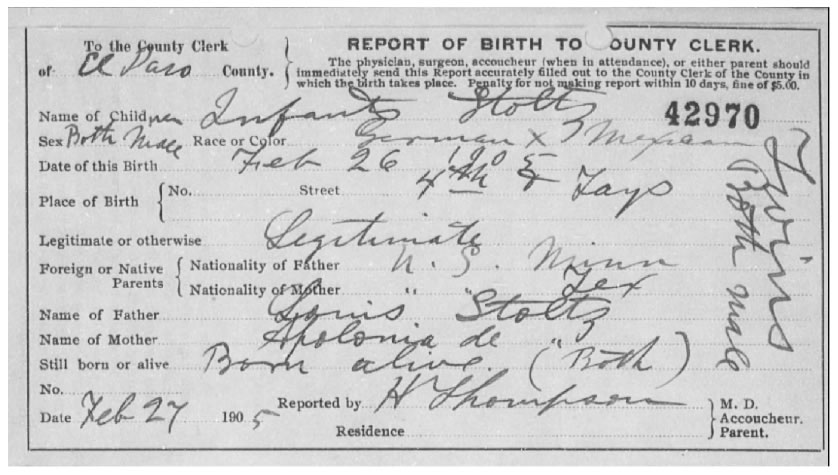 But there were no death records online for the twins, and no one in the family had ever heard of Louis and Apolonia having twins. What happened to them?

The only clue I had was the old Texas Death Index, which lists names with year of death and a reference number. In 1905 there was listed an Edward Stoltz, and in 1906 a Henry Stoltz. Could these be the twins? No parents were listed. I wrote to the El Paso County Clerk hoping the death certificates could be found and were somehow missed in the state’s records digitization effort.

The death certificates I received from the county clerk proved that the “Infants Stoltz” were indeed named Henry and Edward. Henry lived only 13 days. On the death certificate Dr. Thompson listed as a predisposing condition “very feble [sic] and small” and the cause of death was cited as “Inanition.” (While Henry’s nationality was cited as “American,” the somewhat sturdier Edward’s death certificate said he was “German,” although both were labeled “German x Mexican” at birth.) Edward clung to life for over a year, finally dying on September 18, 1906. Dr. Thompson gave no immediate cause of death, but simply cited the predisposing factor as “Gen. Debility.”

What is inanition? It is the exhausted state brought on by malnutrition or starvation. It’s not a word commonly used in medicine today.

How did the children starve? Louis and Apolonia at the time already had five children, but the fact that they had a regular doctor seems to indicate this could not have been the result of extreme poverty as the other children survived. I’ve been unable to find Louis and Apolonia in the 1900 U.S. Census, but in the 1910 census he said he rented the house on Tays Street and was employed as a salesman in a cigar store. Certainly not rich, but apparently able to provide.

As I understand it, “inanition” was used to describe a state that began in utero due to some defect in the placenta. Thus a newborn would die of inantion, but a baby that survived beyond the neonatal stage and died of complications from the same condition would typically be ascribed a cause of death as “failure to thrive,” meaning they never were able to fully process nutrition. Sometimes this was due to a defect in breast milk at a time when there was no such thing as prenatal care.

It is almost beyond imagination to think of what it must have been like for Louis and Apolonia. Most likely Edward and Henry were born prematurely, which in 1905 practically assured death. After the fairly quick death of Henry, one can only imagine the pain they must have experienced over a period of more than a year as they watched Edward unable to grow and finally perhaps to slowly starve to death. One can imagine in those days women might even blame themselves for such a tragedy.

Of their 12 children, Louis and Apolonia saw two-thirds survive beyond youth; one died as a young adult. Why the painful story of the twins was never passed on may be due to the fact that the oldest of the children, Charles, was 10 at the time and would have likely been the only one old enough to remember.

Henry and Edward Stoltz are my granduncles.

2 comments on “The Forgotten Twins”