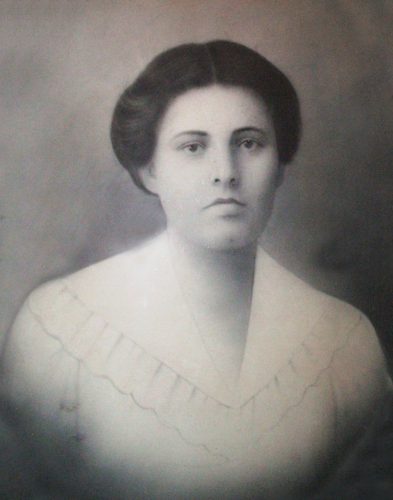 For some time I had been stymied in tracking the ancestry of my paternal grandmother Consuelo Chávez Stoltz (1904-1969). Part of this is due to the fact that her father, Carlos Marín [UPDATE: His name was not Carlos, but Mercedes], is said to have abandoned Consuelo, her older sister Aurora (1903-1979), younger brother Carlos (1906-1994) and their mother, Simona Balderas. After that, Simona married Simón Chavez, who adopted her three children and had six more with her.

In our family history Carlos Marín is not a sympathetic figure; one version of the abandonment is that he intended to turn over his family as servants to satisfy gambling debts. Finding out anything about him is difficult, given that we do not know where or when he was born or died; nor do we know where he and Simona may have been married, so tracking down that documentation is a daunting task.

It seemed I knew enough information about Simona to be able to track her family down. I had her birth and death dates and places. Unfortunately, for a number of years this was also unusually difficult, because the names of her parents provided by her son Felix Chávez Sr. (1910-1986) on her death certificate turned up no leads in searches. I certainly understood that Felix may have mixed up the surnames or the recorder misunderstood him. If Simona’s surname was Balderas, how could her parents’ names be Juan Rocha (misspelled as “Roche”) and Reyes Balderas? Was she the child of a previous marriage of her mother? That would certainly complicate things. 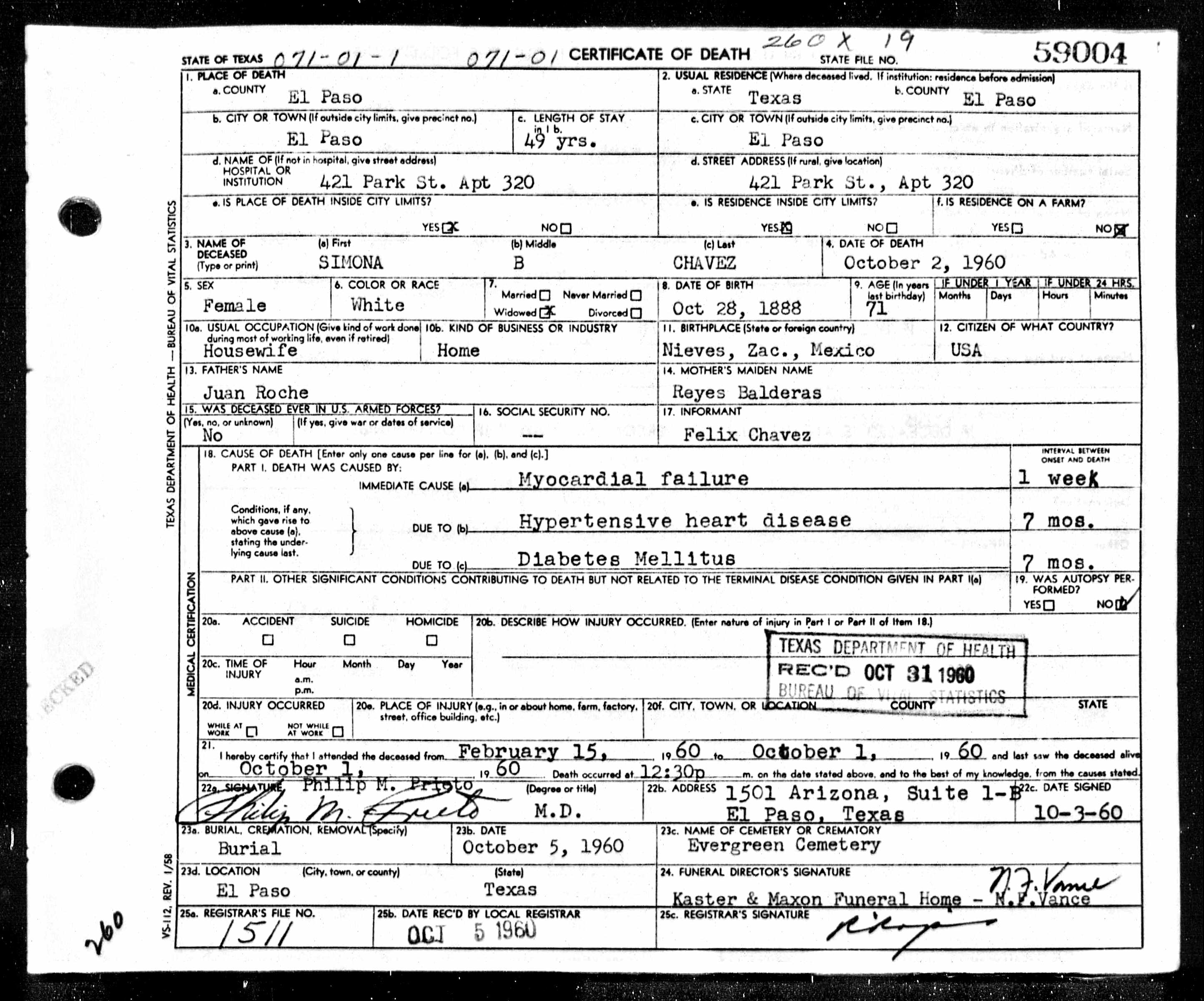 One day I was going through and gathering as many documents as I could on my great-grandmother Simona in the hopes that something would appear that would provide a clue. And finally I got one in the form of a 1949 immigration identification card. This is clearly Simona; the birth date (28 Oct 18881) and place (Nieves, Zacatecas) match. It has her maiden name and married name, and identifies her as a widow, her late husband as Simón. (Simón Chávez was born in San Juan de Guadalupe, Durango, in 1880 and died in El Paso in 1944.) Match. Match. Match.

And then at the bottom, something I had not seen before in this type of record: Her parents’ names. They were given as Juan Balderas and Refugio Rocha. So it seems the surnames were indeed reversed on the death certificate, but more than that her mother’s name was not Reyes, but Refugio. 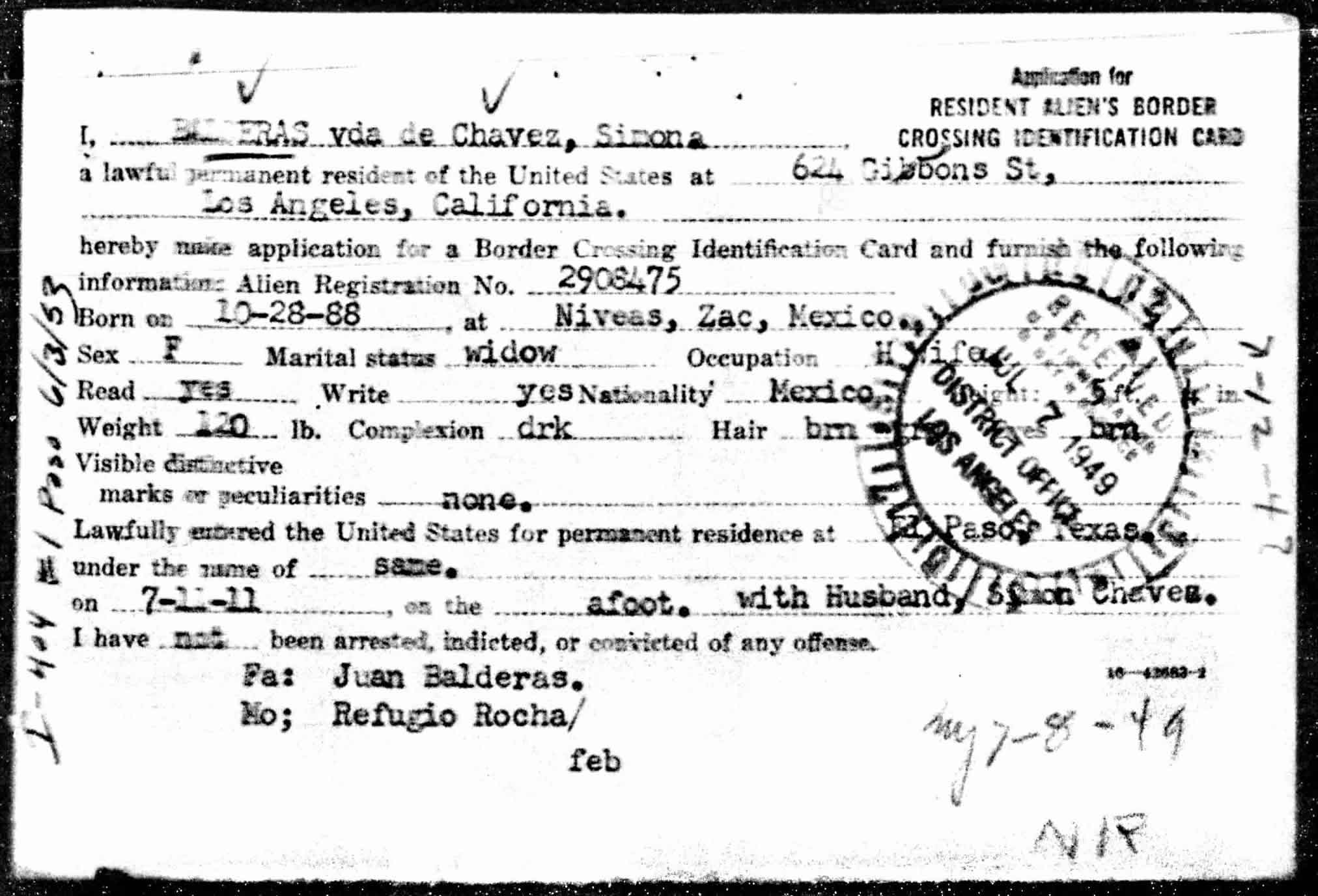 By the way, this card also gives her Los Angeles address as 624 Gibbons St. So there’s further research to be done on her time in Los Angeles. 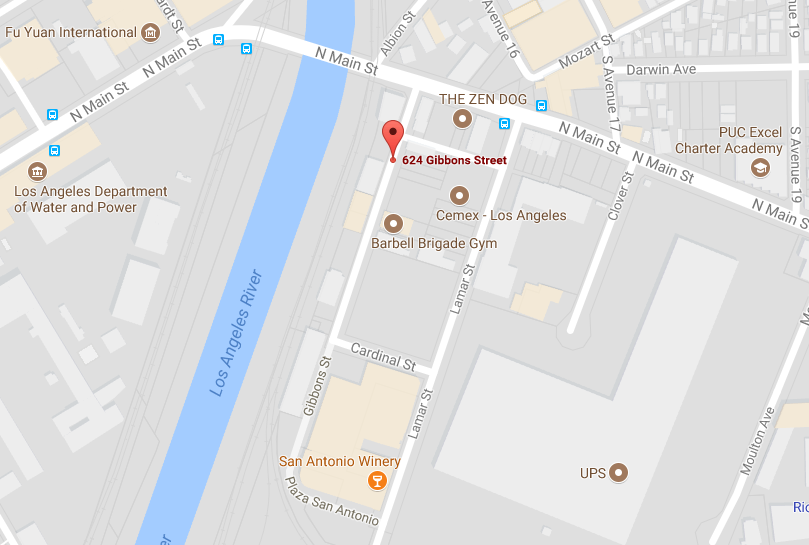 There’s no doubt this card identifies Simona, but could the border official have made a mistake on her mother’s name? I needed a second source to verify this. So I went in search of birth certificates for her children. Now I had already searched high and low for my grandmother’s birth record, which naturally I would very much like to have, but to no avail. I also struck out with the other children of Carlos Marín, her sister Aurora and brother Carlos, even though I know all their birthdates and birthplaces, thanks to Simona’s Petition for Naturalization. 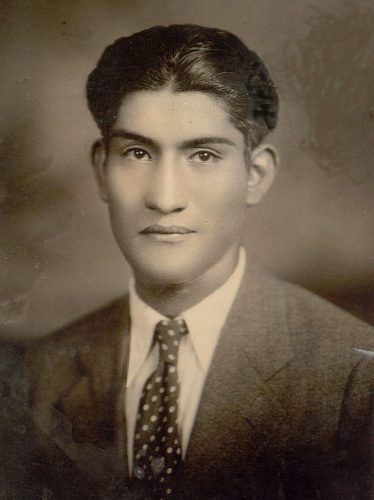 But I finally did find a Chihuahua birth certificate for the first child of Simón and Simona, my great-uncle Felix Chávez Sr. He was born in Chihuahua, Chihuahua, on 20 November 1910, before the family moved to El Paso in 1911. A veteran of World War II, he died 13 September 1986 in El Paso.

When Felix was born, Simón and Simona lived in Chihuahua at 707 Calle Aldama. The record, dated 19 December 1910, notes that the child was not yet vaccinated. Simón’s parents are given as León Chávez and Cecilia Gámez. This we already knew. And Simona’s parents are recorded as Juan Balderas and Reyes Guzmán.

So, is her mother Refugio Rocha or Reyes Guzmán? There’s no chance of coincidence; both documents clearly identify Simona and Simón. On to more research!

In the civil registration for Nieves, Zacatecas, I found the marriage record for Juan Balderas and (drumroll) Refugio Rocha. They were married in Nieves 19 April 1880. We learn that Juan’s parents were Tiburcio Balderas2 and Reyes Guzmán. Now we’re getting somewhere. This would not be the first time anyone mixed up generations when recalling names of ancestors. Refugio was 25 years old and her parents are recorded as Santiago Rocha and Francisca Gonzalez. And we learn something else about her: she was married for five years to Andrés Tejada. 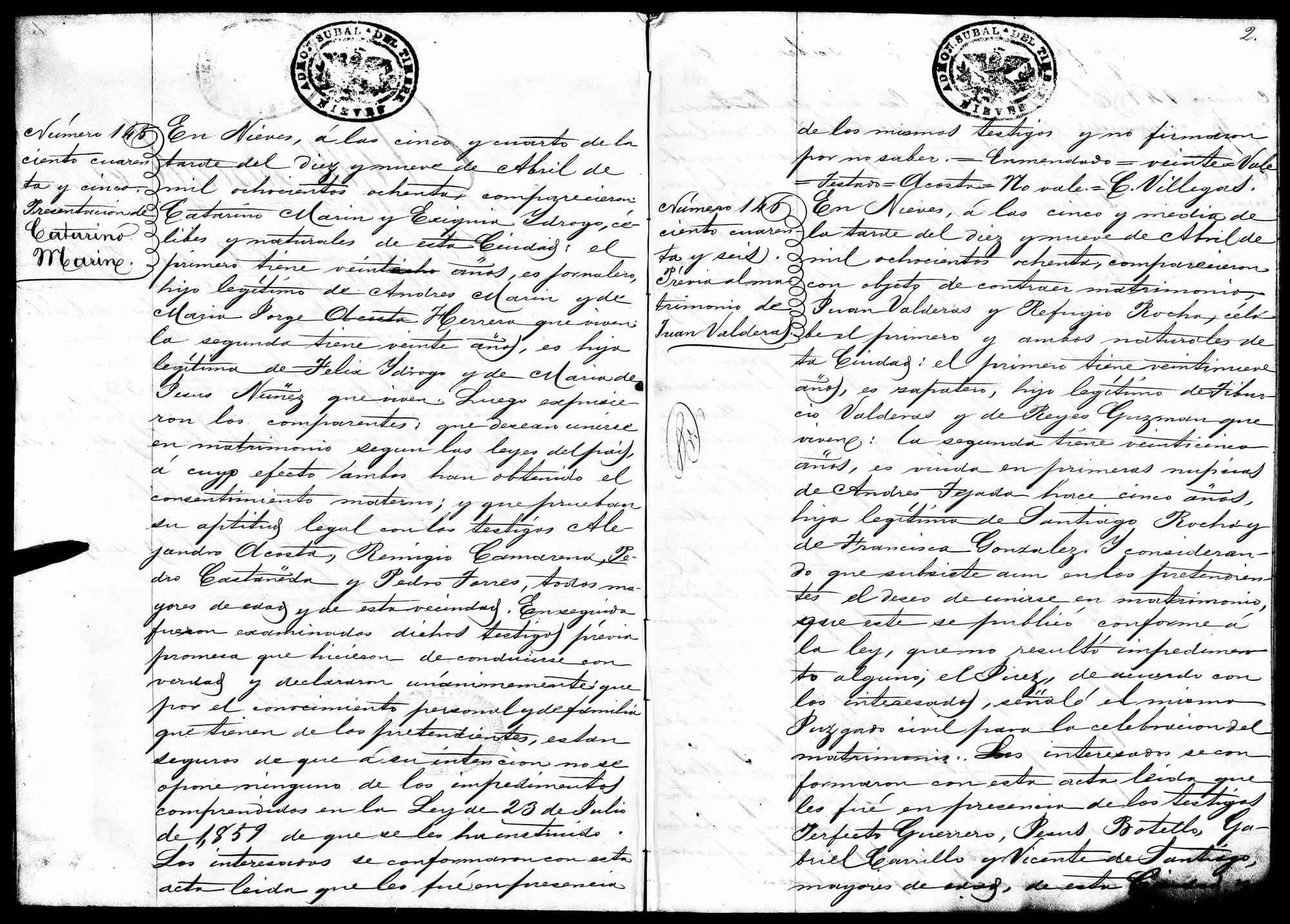 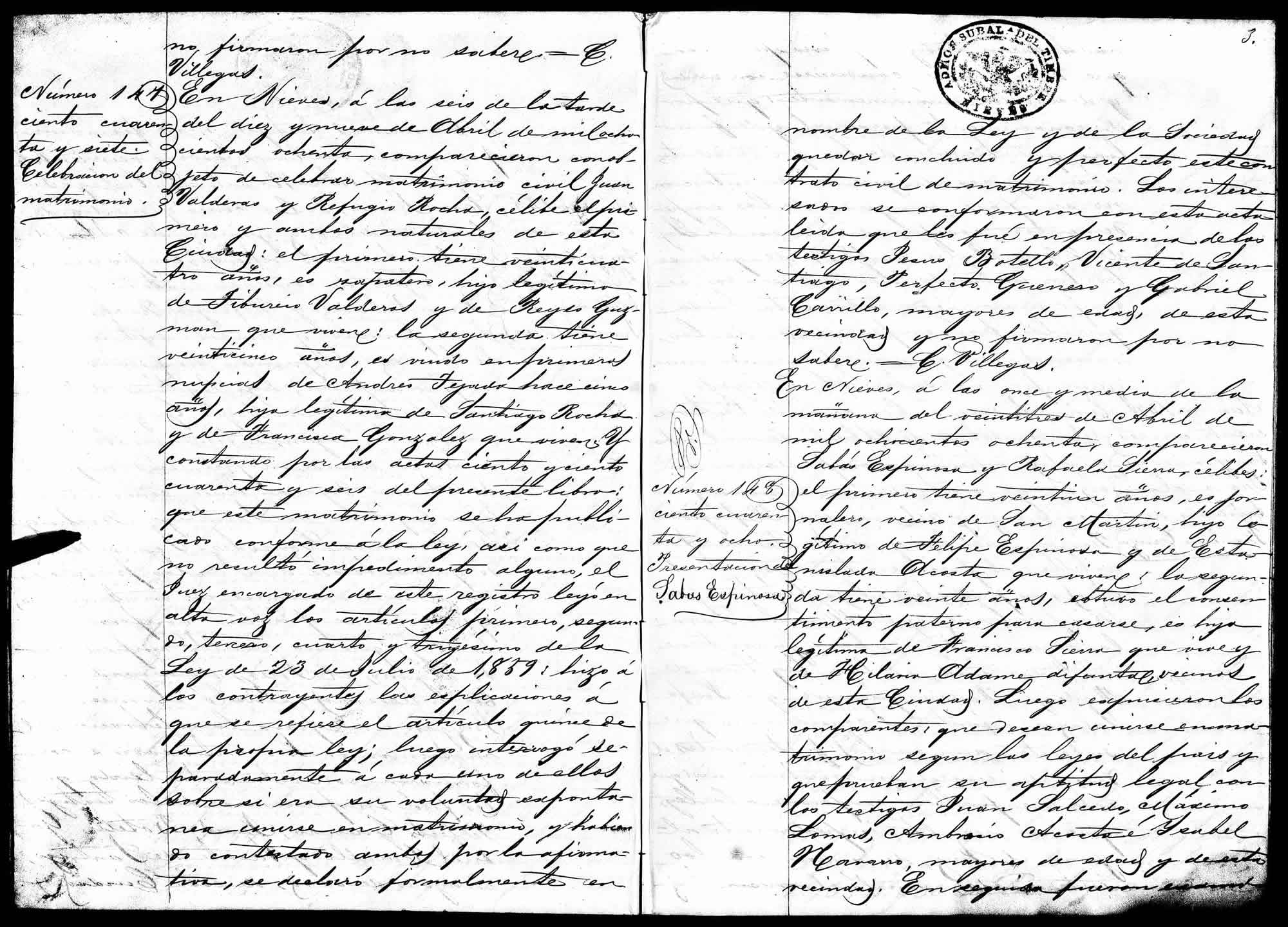 That would seem to be the end of it. But because I was still trying to find birth records for my grandmother’s siblings, I found a marriage record in the civil registry of Lerdo, Durango (where her brother Carlos was born) for the marriage of Silviano Dena and Simona Balderas on 21 Nov 1900. Silviano’s age is recorded as 20, and Simona’s age is given as 18, but if she was born on the date usually given she would be more like 12.3 Here again, her parents are recorded as Juan Balderas and Reyes Guzmán. 😕 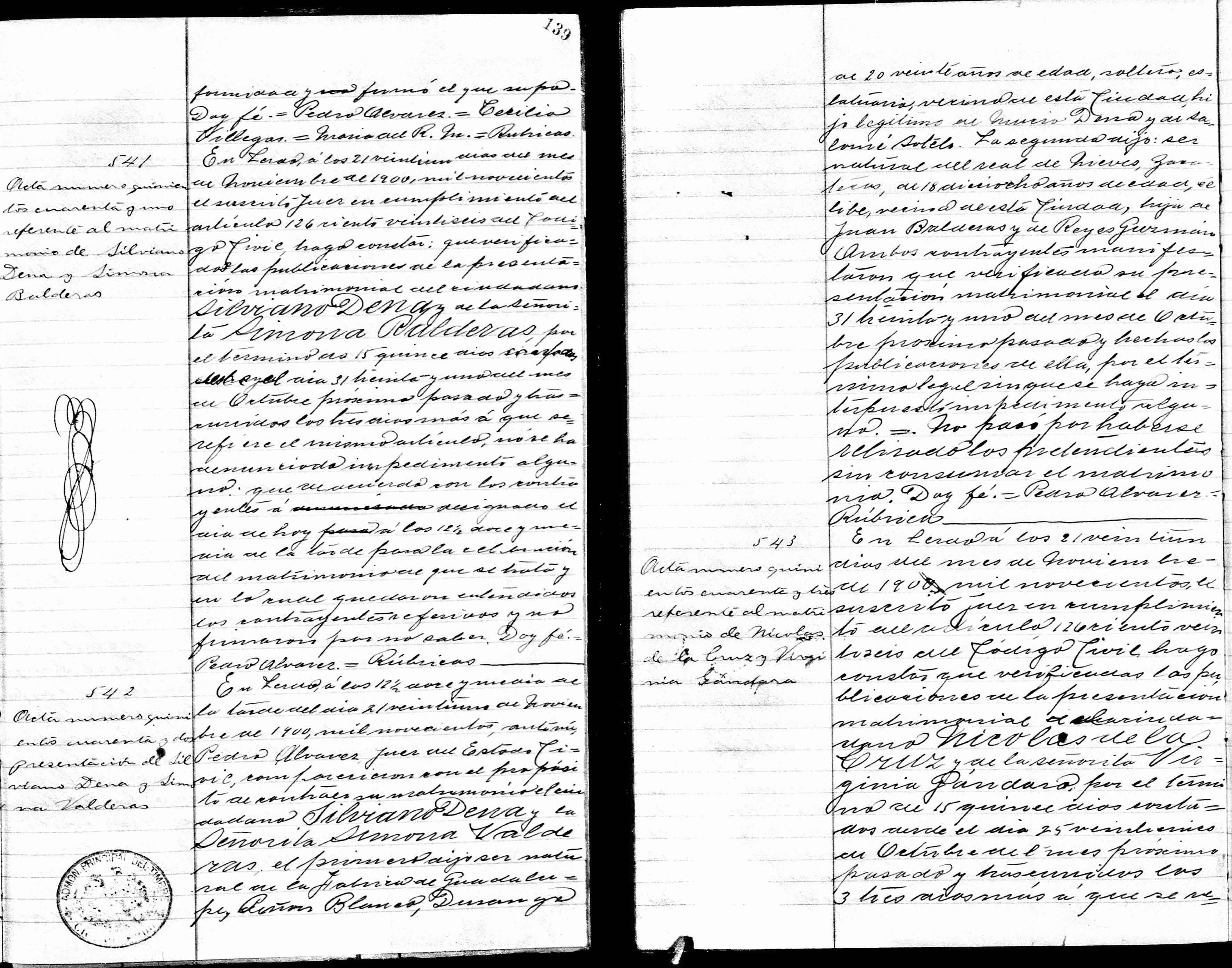 Given the age difference, is it possible there was a Simona Balderas with a father Juan who was married to someone with the same name as her grandmother in the same city? It seems extremely unlikely: in 1900 the total population of Lerdo was just 7,795.4 Given that the parents’ names on Simona’s U.S. identification matches those of the marriage in Nieves, where we know she was born one to eight years later — depending on which record is correct — it seems the case for Reyes Guzmán being her grandmother rather than mother is strong.

So what to make of this confusion? The oldest record is the most likely explanation: that would be the marriage record of her parents, where Reyes Guzmán is her paternal grandmother. Simona had no input into that document because she was not yet born, so we have to assume some sort of confusion happened after that.

So, barring any more unexpected discoveries, my working theory is that the parents of Simona Balderas were Juan Balderas and Maria del Refugio Rocha. Why is her maternal grandmother listed on her death certificate? Is it possible Felix did not know his grandparents or great-grandparents and so mixed up the names? That seems the most likely reason. But why Simona would also be confused is a more difficult question! 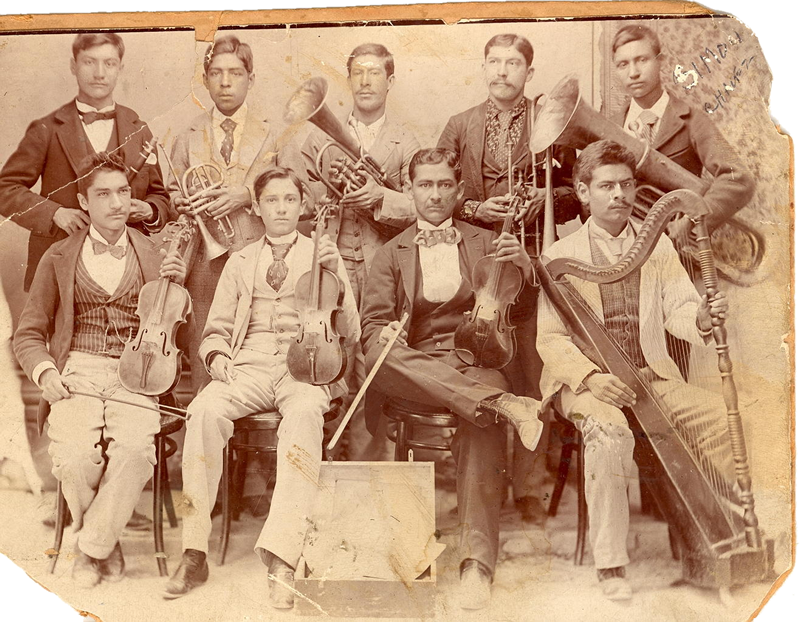 7 comments on “Breaking Down the Balderas Brick Wall”