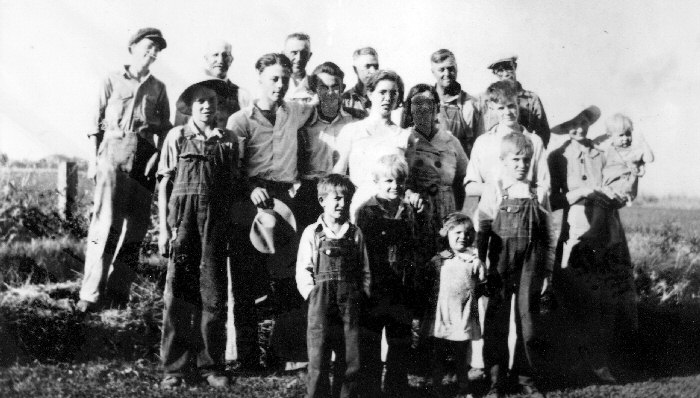 The following is an account by Adeline (Klinger) McCarthy that illustrates daily life on the American Frontier. This story is courtesy of Cheryl Moore, Adeline’s granddaughter. Cheryl writes that “It was written in pencil, on faded yellow lined paper, held together with string. It’s missing the ending, but very insightful.” Adeline married my first cousin twice removed, John Francis “Frank” McCarthy (1883-1966), whose mother Josephine, my great-grandaunt, was the daughter of Peter Stoltz and Appolonia Stricker, my great-great-grandparents. While Peter and Appolonia homesteaded the land as pioneers in the Dakota Territory, by 1889 the area had become the 39th state.

In the Red River Valley of North Dakota is a farm of 640 acres of fertile land with golden grain as a background. The new red barn and the big square house with its spacious lawn look inviting indeed. It’s a place of comfort, but as the farm has not adopted the eight-hour law, it is also a place of work. Many hired hands are employed at harvest time, and the members of the family have their various tasks.

There are eleven members in my family. My father, Frederick Klinger, mother Eliza, sisters Laura, Clara, Mary, Maria, Lizzie, Anna, Eva, Fred Jr. and me… Adeline. Being the youngest girl, the whole family has spoiled me. I do as I please. Mom and dad at this late hour are beginning to see that parties, entertaining friends on week-ends, auto rides, dances, music and school are taking up all of my time. They tell me that I must help my sisters and learn to wash dishes, cook, bake and sew. I display my temper if asked to do housework and decide at age seventeen, that I’ll teach school first.

Mom and dad tried to tell me that it wasn’t necessary for their daughter to work for others…they had plenty of money. Besides, I might get homesick away from home so long. But I was determined, so mom and dad decide to let me try my luck.

I took the teaching exam and was one of seven out of the thirty-five examined to get a certificate. I secured a position as a rural schoolteacher in the western part of the state. Armed with a second grade certificate and common sense, I left my hometown, my friends, and the shelter of a lovely home with loving parents, just to teach school.

Carrying a traveling bag, clad in a navy blue suit, tan shoes, gloves and wearing a small blue hat, I boarded the train. There were hurried good-byes and good lucks from a group of friends with promises to write and to not forget them.

I arrived at a small railroad town about noon the next day. A farmer who introduced himself as the president of School District 33 met me at the depot. He told me that a Mrs. Songal always boarded the teachers and that he’d take me there right away. Leading the way to a hack drawn by two fat horses, he loaded my trunk and bag. We jogged along at a slow pace and after covering about five miles of poor roads; we arrived at the door of the boarding house. A short gray haired lady pleasantly greeted me and took me to my room, telling me that she’d fix lunch. While I ate, Mrs. Songal talked about the school and the former teachers and their trials. As I had a couple of days before I began to teach, I learned many things from the gossiping (but well intending), Mrs. Songal about both the pupils and the parents of District 33!

At eight o’clock on September seventh, I unlocked the schoolhouse, put up the frayed flag and looked over things in and about the school. At nine o’clock as I picked up the little hand bell to ring, I really trembled. I was determined, so putting heart and mind on my schoolwork… I won. Yes, I was lonesome at times, but I didn’t write that home. Oh no, such things I must overcome by myself, and I did.

When the school needed things that the school board didn’t provide, I raised the money myself with a basket social and program. I won the love and respect of the parents and pupils alike. I taught school there for two years and was asked to teach a third year, but I decided to go back home to mom and dad as a dignified school ma’am. Mom and dad are proud of my success and spoil me more than ever.

I soon find out that they have a nice young banker from a neighboring town that they think would make a nice mate for me. He is about thirty years old, wears glasses, and teaches Sunday school class. The whole family would marry him; they all think he’s perfect. Oh, he’s nice, but I’m sorry to say that I dislike him. (Although his candy tastes good and his flowers are pretty!) I accept his proposal because mom and dad say so. 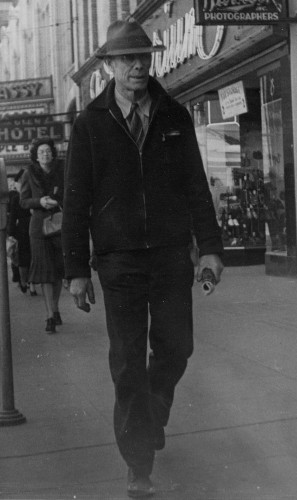 Visiting my sister’s husband is an old friend of his. Frank McCarthy. Frank is a tall, dark, handsome, young man. He was born and raised in North Dakota. When he grew up he decided that farm life was not for him. He left the area to try his hand at steam shovel work and after seven years returned to visit friends with a small roll in his pocket.

Frank is quite an artist on the violin and soon becomes a favorite among his former friends and also among the younger people. I admired him as a child and now my heart beats a little faster, and my cheeks are a brighter color when he holds my hand in a dreamy waltz.

Mom and dad soon give me to understand that he is all right as a family friend, but he’d never do as a son-in-law. Frank playing the violin and I playing the piano pass many happy evenings.

Frank and I are very much in love with each other, but dad and mom forbid Frank to come to see me. My sister’s husband thinks of a scheme. My sister plays sick and asks mom to let me come to look after the baby for her. So, I go to stay with them. Soon after, Frank and I become engaged. Frank leaves for the west to find and buy a ranch. He invests in cows, horses, and other farm equipment and gets things ship shape. Frank returns and he and I are married with my sister and her husband as witnesses.

Mom and dad and the community were taken very much by surprise by the marriage. Dad becomes very angry. When I go to beg mom and dad to forgive me, dad meets me at the door with, “You have got what you want…now go.”

My sister and brother-in-law give us a farewell party, and Mr. and Mrs. McCarthy leave for their new home in the west. We traveled for two nights and three days before we arrived at a small town in Washington State, in the Yakima Valley, on the Yakima Indian Reservation.

When I see my new home, my heart stopped for a second. Though a typical ranch home, it looked awful to me compared to the homes in North Dakota. It now dawns on me that I won’t have the same living as in my North Dakota home. Inside, Frank had it fixed up cute, but very simple. The furniture was mission style, with just the necessities, chairs, tables, sideboard, and a newspaper rack. The kitchen was painted white. The dishes and cooking utensils were from Sears and Roebuck and there was a second hand range. The ranch had about ten acres outside of town. The house had a good back yard, or so I thought. Determined, I set to work and by sweeping the floors I blister my hands. I tried to hide the blisters so Frank wouldn’t laugh or feel sorry for me. (I didn’t know which he would do.) With the domestic science and art that I had learned in school and with the aid of a cookbook, plus numerous burns and blisters, I’m able to prepare an edible meal. I wash the dishes, and with that, I do my first housework.

Frank and I have a few cows and decide to sell milk. I have milk to bottle, butter to make, hens, chickens and a hundred other things to see to, or so it seemed.

Frank is busy leveling the ten acres, installing a pumping plant and getting a few more necessary things. Our bank account is disappearing rapidly. Busy days are these with shadow and sunshine. Frank loses his pipe stem and holding out a package, I laughingly suggest a stick of macaroni. He finds it’s an excellent substitute!

We have our good times, but we are getting short of money and time. Frank is obliged to spend his last dime for salt and he is out of tobacco. We have bad luck. The cows failed the T.B. test and were sold for tankage. Gophers ate the corn as soon as it was planted. Magpies ate the eggs, and every other trial appeared. I was at times lonesome and blue. One day a letter came from my dad saying, ”If you’re sick of your bargain come home.” I had never written anything but sunny letters to mom, but they must have read between the lines. But dad’s letter and the other letters that tell of good times only gave me more grit and seem to make my work lighter.

At the end of the first year, we are the proud parents of a six-pound son. Mr. Frank Jr. (Nick) I made his layette out of some old fine clothes of mine. Making them over strengthens me. With the doctor and a nurse to pay, Frank gets work in a garage as a mechanic. The ranch eats up the money, so for years to come he works hard at the garage. Going to work early in the morning and coming home late at night. I run the ten acres. I decide that while I have to care for Frank Jr., I would raise chickens and turkeys. My first year’s profit with them was $55.00. Each year I was more successful and by turning, patching, darning and practicing a strict economy we get by.