For some time I’ve had a mission to find a photograph of the house on Fremont Avenue in downtown Los Angeles where the Alvarado family lived in the late teens and early 1920s. I’ve spent many hours combing through online collections of historical photographs, hoping to find some clue that would give me a window into the neighborhood where my grandmother grew up and was married off at the age of 15, where my granduncle Carlos died in the flu epidemic of 1918, where my great-grandfather died in 1921.

Imagine how I feel today; I’ve solved the puzzle and have a photo of that neighborhood and the very house.

The trail begins with the family’s record in the 1920 U.S. Census. The Alvarado family, José María, Jesús, Leopoldo and Cecilia were living at 543 S. Fremont Ave. (my grandmother María Lucia had been married off some months earlier and was living with her first husband Willard Vane Wood elsewhere). The census taker noted next to the address: “Rear.”

Now I knew they had lived on Fremont Avenue. My grandmother had told me this before. She said the house where she lived was right where the Harbor Freeway (110) is today. But here’s what puzzled me: Fremont Avenue between Fifth and Sixth still exists today, right behind the Jonathan Club. Granted, there are office buildings there now, and the freeway does come right up to those buildings, but the street was not obliterated. I thought that perhaps she was mistaken. But of course it turns out she was right; the answer lies in that notation by the census worker: “Rear.”

I recently came across a 1921 map, Baist’s Real Estate Atlas of Surveys of Los Angeles, which shows the actual buildings and addresses of all the structures on Fremont Avenue between Fifth and Sixth. That gave me some orientation and I could see there was a building behind a structure with the addresses 547 and 545. Hey, that would be 543! But how did that bring me any closer to finding a photograph?

The answer came today in looking at a photograph of Fremont Street from the USC Digital Library. One of the buildings had a prominent sign: Hotel Knickerbocker. A quick Google search delivered the address of this long-gone hotel: 551 S. Fremont. Which means, according to the Baist map, it was right next door to the building at 545-547 with 543 — the Alvarado residence — behind it. And there it was, the photo I had searched for so long.

The Baist map carefully notes the name of the other hotels on the block, but there is a considerably smaller building next to the Alvarado residence in 1921. Clearly the Hotel Knickerbocker must have been built between 1921 and 1925 when the USC archive photo was taken. The photograph of the rear house appears large, but I should point out the 1920 Census records two households as living at that address. 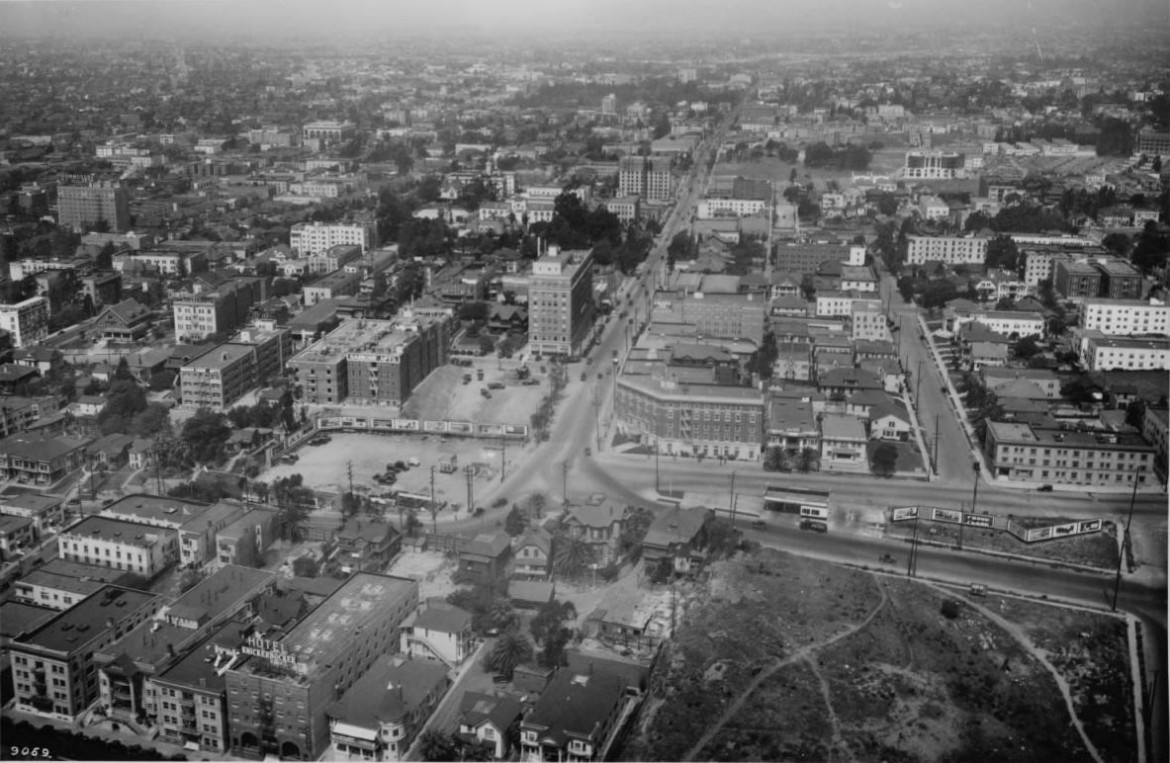 And of course the rear house where my grandmother and her family lived was so far back from Fremont Avenue that its location does indeed today lie directly under the Harbor Freeway.