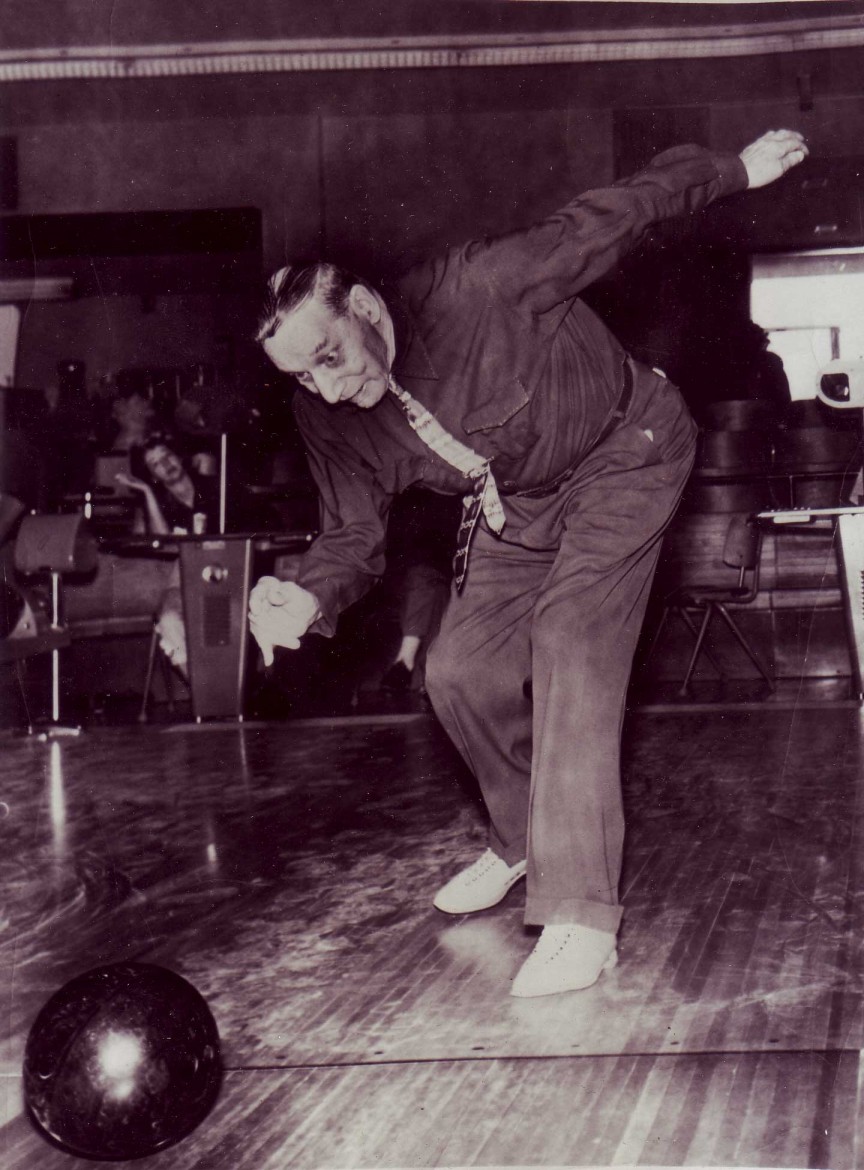 The following article from the El Paso Times of March 16, 1957 is a profile of my great-grandfather Ludwig “Louis” Stoltz, born 18 May 1866 in Delano, Wright, Minnesota. He was the son of Peter Stoltz (1836-1921) and Apollonia Stricker (1831-1896). Louis was the first generation of his family born in the United States; his father emigrated to New Orleans in 1852 from the village of Berg in the Rhineland-Palatinate (Pfalz) region of Germany. At an early age, Louis sought adventure in El Paso from the family homestead in the Dakota Territory. It was there in West Texas that he married Apolonia Luján (1872-1929). Their son Peter Anthony Stoltz (1902-1943) was my grandfather. The title of this blog post was the headline from the newspaper story, and the accompanying photo also appeared in the following story.

It seems that a person never gets too old to bowl.

There is one bowler in El Paso—possibly the oldest active participant in this sport in the city—who will celebrate his 91st birthday next May 18.

Although he has been handicapped since he was 12 years of age, he has been an ardent bowling enthusiast down through the years. At the age of 12 he was shot accidentally in the right arm, just above the wrist, which left the two middle fingers of his hand stiff. However, this doesn’t seem to bother his bowling any.

Stoltz has been bowling, off and on, since 1899, having picked up the sport in Dallas, but he admits it is not his favorite pastime. “Billiards is my hobby,” he said, “but good pool halls have been outlawed in Texas, so I can’t play anymore.”

A native of Delano, Minn., he was born May 18, 1866. He first came to El Paso in 1889. His wife died in 1929. His son, the late Pete Stoltz, died here in 1943. The younger Stoltz was an employee of the Newspaper Printing Corp. here. His grandson, also an employee of the publishing firm, is currently a member of the El Paso Times Bowling League. The elder Stoltz resides with his son-in-law and daughter, Mr. and Mrs. Felix Chavez.

A meat cutter by trade, the left this business to operate a billiard establishment for 10 years.

Boasting that he can still beat his grandson, who has an average in the 150s, Stoltz can still bowl in the 150s and 160s. He said he has had several games of 200 and over and his highest game was a 224.

He is but one example that bowling is not a sport just for the younger folks, but is one for the whole family, young and old alike.