The city of Los Angeles, El Pueblo de Nuestra Señora de los Ángeles, was founded on September 4, 1781 by a multi-racial group of settlers from Mission San Gabriel. The city continued to grow slowly; its leaders generally Californios of the landed classes who had received vast tracts of land, the ranchos, by grants from the King of Spain. 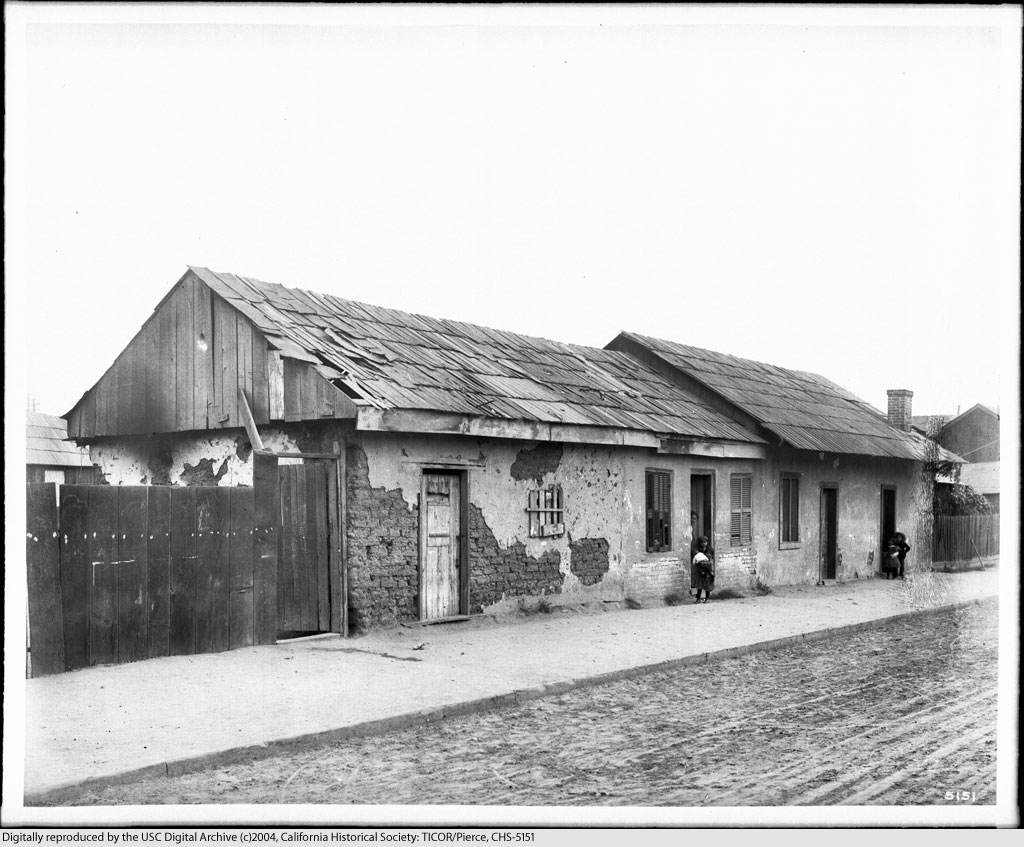 From the time of its founding to the time my great-grandparents José María Alvarado (b. 20 Nov 1862 in Agua Caliente, Sinaloa, d. 21 Mar 1920, Los Angeles) and Jesús Alvarado de García (24 Jun 1871-12 Nov 1966) arrived here in 1899, the city underwent profound changes. The Mexican population whose ancestors had founded the city had been segregated by newly-arrived Americans into a small section known as Sonora Town, a place characterized by dilapidated housing, crime, sickness and poverty. 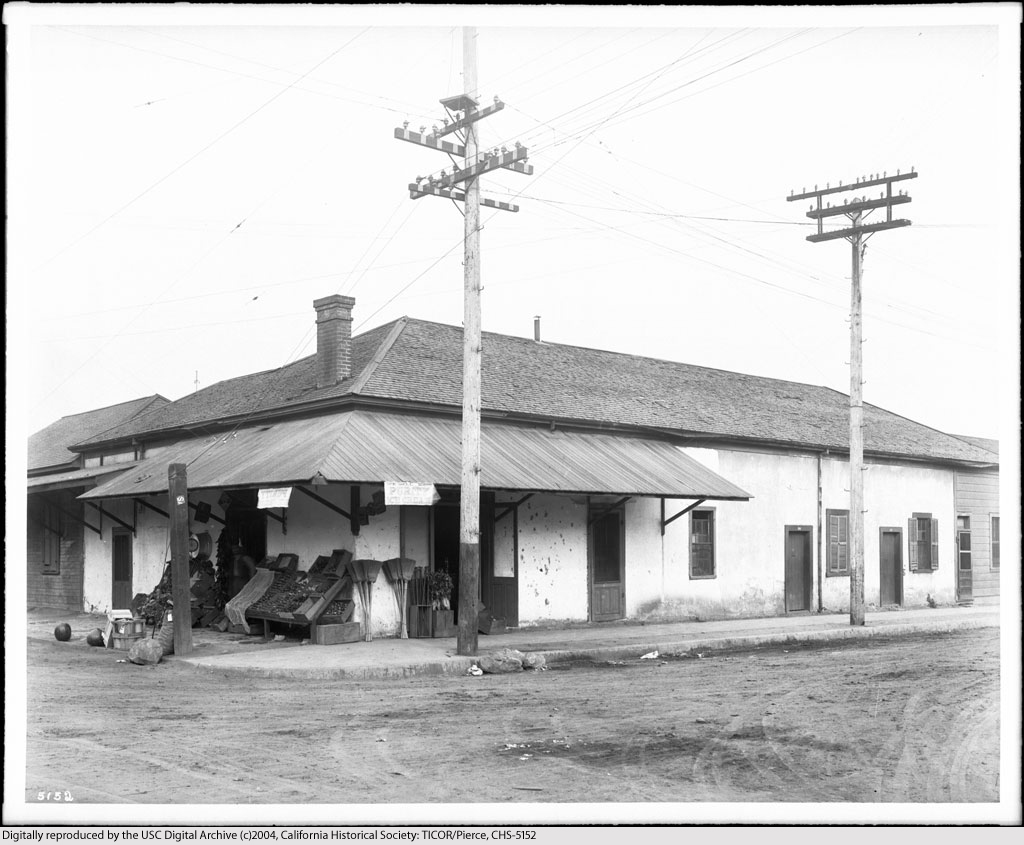 Here the city was first founded, the main area of the town was around the Plaza and the Plaza Church of Our Lady of the Angels. There the residents built adobe houses and waterproofed the roofs with tar brought from Rancho La Brea, today’s La Brea Tar Pits near the Los Angeles County Art Museum in Miracle Mile.

In 1821 Mexico became independent from Spain and was known as the Empire of Mexico. The news took a year to reach Los Angeles. By 1830, the population of the Los Angeles area was 1,180; 770 people lived in Los Angeles, 230 on surrounding ranchos and 160 at two missions, San Fernando and San Gabriel.

The first U.S. citizens to arrive in California by land came in 1826, a group of trappers led by Jedediah Smith who stopped at Mission San Gabriel. Thus began a trickle of Americans into California which would become a flood with the Gold Rush of 1849.

An aborted American invasion of Monterey in 1842 demonstrated that the United States coveted California and would obtain it by any means. The growing population, which the last Mexican census in 1844 showed to be 3,041 from San Fernando to San Juan Capistrano, was wary of the influx of Americans. 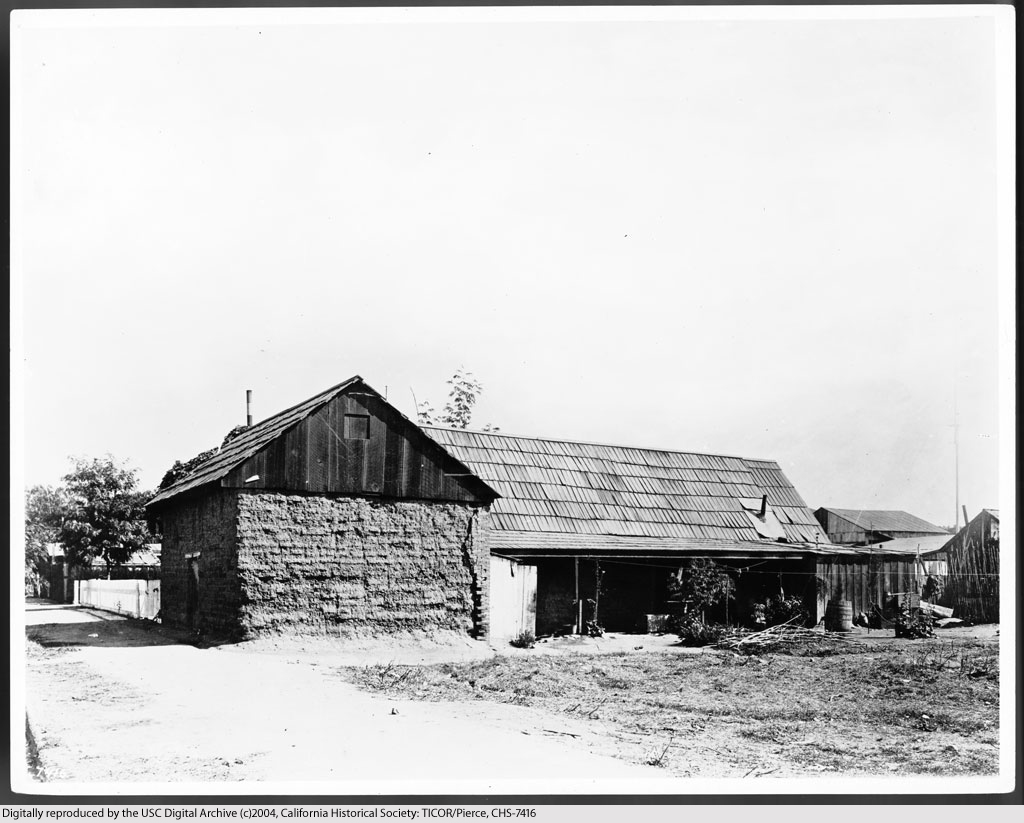 When the United States declared war on Mexico in 1846, American military forces moved quickly to seize California. Monterey, Santa Barbara and San Diego were occupied, and a force of 400 Americans landed at San Pedro to capture Los Angeles, which at the time had only 675 adult men. Yet the Angelenos fought a number of battles to keep the Americans at bay at locations that included present-day Carson, Montebello and City of Industry. A ceasefire was eventually negotiated, and in the 1848 Treaty of Guadalupe Hidalgo, Mexico ceded Alta California to the United States. 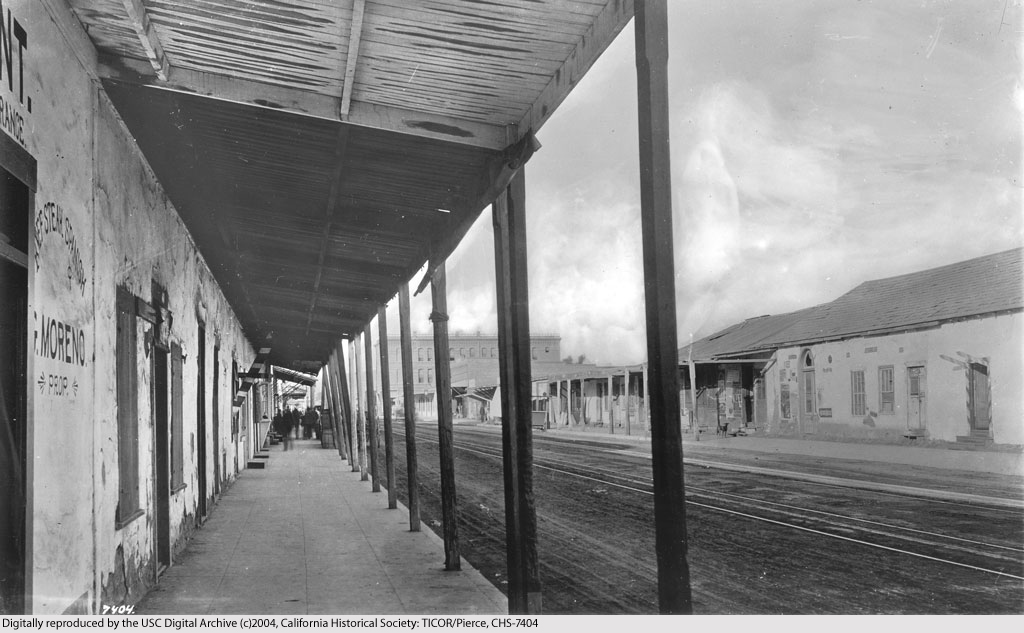 The victorious Americans built Fort Moore on a hill overlooking the Plaza to maintain the military occupation. The city was governed by military officers, who dictated their wishes to the elected mayors. More Americans settled in the area and brought a reign of violence to Los Angeles; the most notorious were the settlers of the first Anglo town, El Monte, who would ride into Los Angeles to randomly attack the Mexican residents. The “Monte Boys” would terrorize the people of Los Angeles for years.

At the time of the Treaty of Guadalupe Hidalgo, 75 percent of all Angelenos were Mexican; by 1858 Mexicans accounted for only 47 percent. And the number of Americans continued to increase. 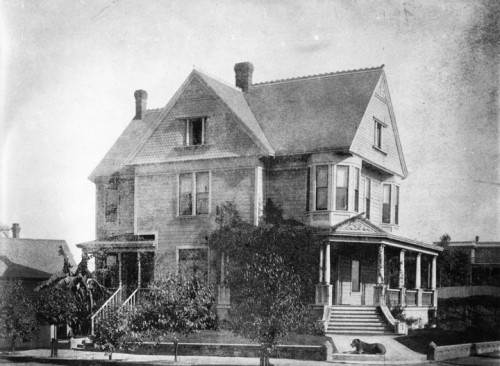 When José María and Jesús arrived in Los Angeles in 1899, they found a city that had undergone dramatic changes in just 50 years under American control; the population was already 102,479. They settled at 414 Bellevue Avenue at North Broadway in the old city center near the Plaza Church. The Americans called this section of the city “Sonora Town,” presumably because so many of its residents were miners from Sonora who had arrived in the first Gold Rush of 1842. José María and Jesús lived at the southern edge of this first barrio. The city was dense; grand houses sprouted in close proximity to the barrio of Sonora Town; one block south of the Alvarado family at 503 North Broadway was the house of Harry Chandler, who would become publisher of the Los Angeles Times (the 1900 Census give his occupation as “Business Mgr, Newspaper”), and not far above them they could see atop a hill the mansion of J. W. Robinson, founder of Boston Dry Goods, which would become Robinson’s Department Store. 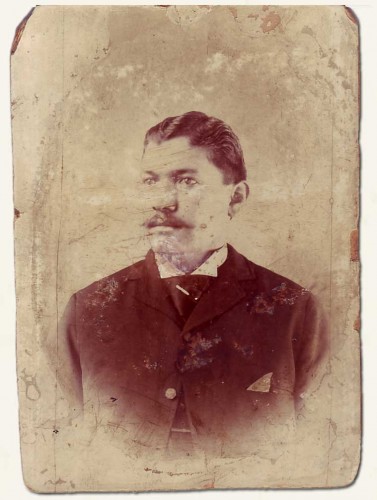 The housing of Sonora Town was generally either old adobe structures or “housing courts,” which were ramshackle structures built around a central area. They generally consisted of two rooms. A kitchen, typically six by 10 feet had a small wood-burning stove and a table. The other room usually had a bed and a chair. The buildings were made of pine, whitewashed on the inside and painted either brown or red on the outside, and each room had one window. There was no plumbing, and residents shared a common outhouse. Lighting was by candles. 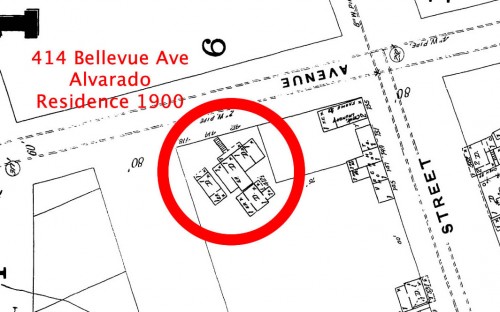 The schematic of the house at 414 Bellevue on a Sanborn map of the time indicates the structure had four dwellings, each with two rooms, so it seems the Alvarado home would have been very similar to typical housing courts of the time. Fourteen people lived in this building, according to the Census. José María and Jesús would have shared the two rooms with their three children, Carlos, Leopoldo and Beatríz.

The December 1905 issue of Charities and the Commons, a social work journal, describes the courts of Sonora Town: 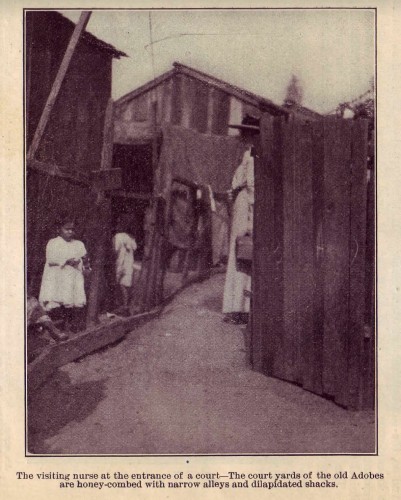 Housing Courts of Sonoratown, Illustration from Charities and the Commons, December 5, 1905

Swarming, tumble-down habitations of every variety are these nests of humanity, the courts of Sonoratown. Once these places were courtyards of the adobes in front, and the “Californians,” as the original Spanish settlers have always called themselves, had plenty of room for gardening and back-yard work, and for the play of big families of children. Now the adobe in front has become a tenement for several families, and the courtyard has been honey-combed with shacks, and tents, and non-descript barn-tenements of one and two rooms (or perhaps two families may occupy one room), until one can think of nothing but the squalor of a Chinese city. You may walk in the middle of a “street” and touch two rows of houses facing each other, or follow a winding path between habitations, tripping over tubs and clothespoles and outdoor fire-places, over dogs and cats and children at play and the tinier tots just creeping about.

Illustration from Charities and the Commons, December 5, 1905

The unhealthy environment of Sonora Town was likely the cause of the death of the youngest child of José María and Jesús, Beatriz, who died 24 September 1900 at the age of four. One can imagine that this tragedy steeled their resolve to move their family out of the crowded and crime-ridden area.

Sonora Town was also where the more affluent Americans came to drink, seek out prostitutes and engage in brawls. As other minorities arrived, they too were segregated in Sonora Town: Japanese, Chinese and African Americans, who settled on a street named “Calle de los Negros,” which the Americans derisively translated as “Nigger Alley.” The Alvarados’ neighbors were Chinese immigrants who worked in a laundry next door. 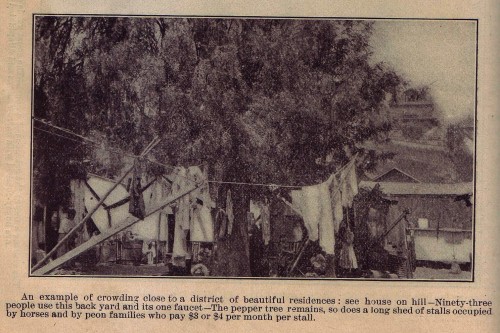 Sonoratown, Illustration from Charities and the Commons, December 5, 1905

The Sonora Town residents who could moved eastward, many as employees of the Southern Pacific Railroad. By 1905 the Alvarados had escaped Sonora Town, living at 238 Myers Street, across from the Southern Pacific Freight Terminal. It was there that José María was apparently employed, according to the 1905 city directory. The next year they had made it into Boyle Heights, living at 1606 Bridge Street, and the next year to 717 Bailey Street near today’s County USC Hospital, where they would remain until sometime after 1913. 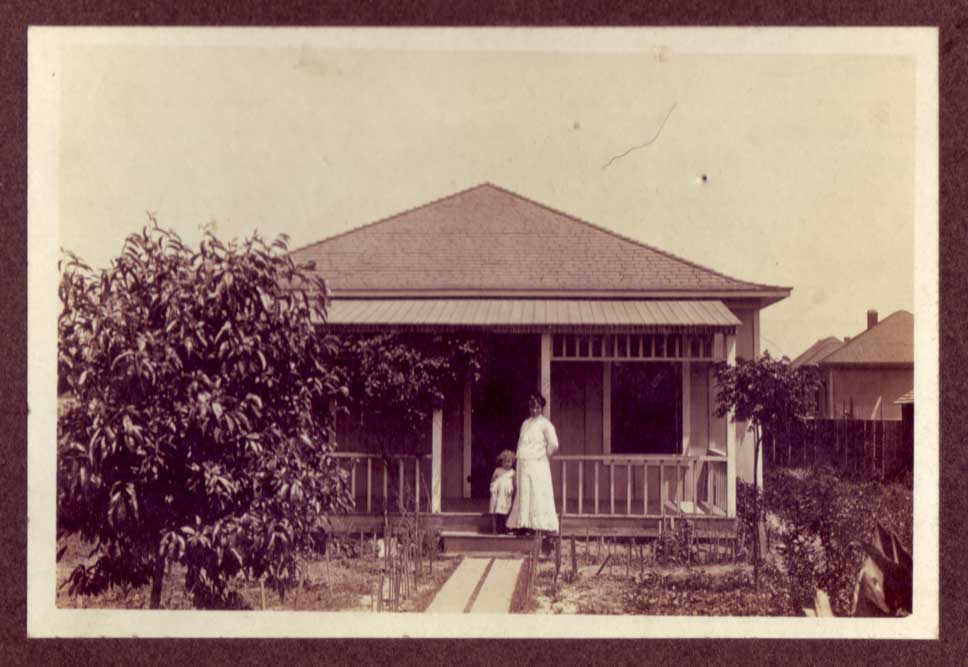 As the Mexican residents of Sonora Town sought better lives on the Eastside, Chinese immigrants became the majority in that area, and Sonora Town became the city’s first Chinatown (the present Chinatown was built to displace the Chinese from the area around the Plaza when Olvera Street was created as a tourist attraction in 1930). Later, new Italian immigrants settled in the area. 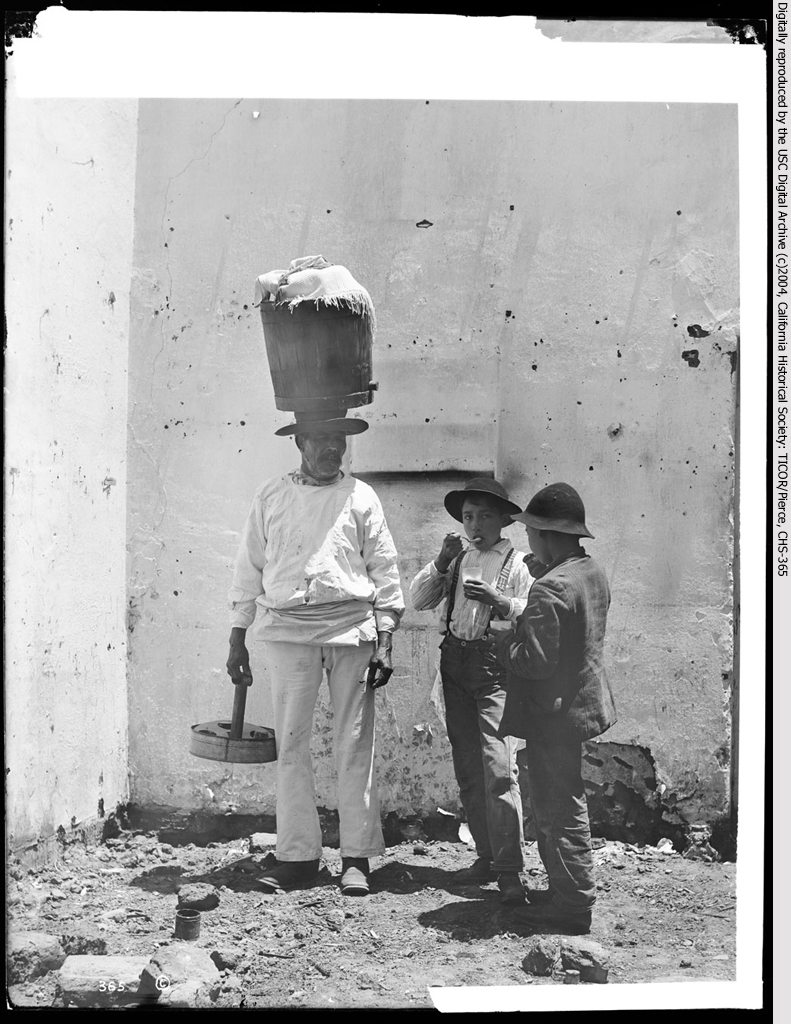 Sources: An Illustrated History of Mexican Los Angeles, 1781-1985 by Antonio Ríos-Bustamante and Pedro Castillo, The Decline of the Californios: A Social History of Spanish-Speaking Californians, 1846-1890 by Leonard Pitt, Whitewashed Adobe: The Rise of Los Angeles and the Remaking of its Mexican Past by William Deverell, USC Digital Archive, Photo Collection of the Los Angeles Public Library, Sanborn Maps Database, Los Angeles City Directories 1899-1913, U. S. Census data for 1910 and 1920.

3 comments on “Sonora Town, the First Barrio of Los Angeles”