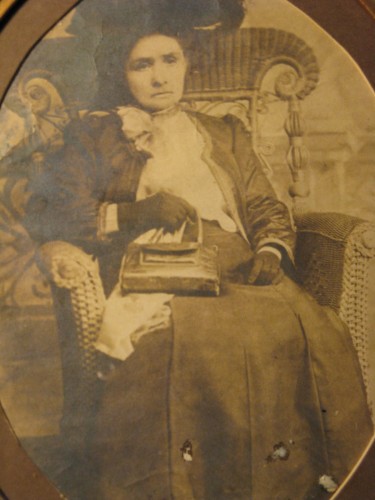 When I first began working on my family history, I was surprised to hear the maiden name of my great-great-grandmother María del Rosario García (1854-1924), carefully recorded by my mother in her bride’s book: Moraila. That was an unusual Spanish name. Could it have really been Murillo, or something similar? Her mother’s name was Verdugo; that was plain enough!

I would learn she was born in Culiacán, Sinaloa, the daughter of Clemente Moraila and María de Jesús Verdugo, both of Culiacán. But then I hit a brick wall. For such an unusual name, there were too many Clemente Morailas in Culiacán at the same time. I had no way of differentiating between them—unless I could find the marriage record for Clemente and Jesús and find their parents’ names.

Some Background on Culiacán

La Villa de San Miguel de Culiacán was founded in 1531 at the northern reaches of the Virreino de Nueva España, the Viceroyalty of New Spain. In 1562 the area was organized as the province of Nueva Vizcaya, covering the area of the modern Mexican states of Sinaloa, Sonora, Durango and Chihuahua. 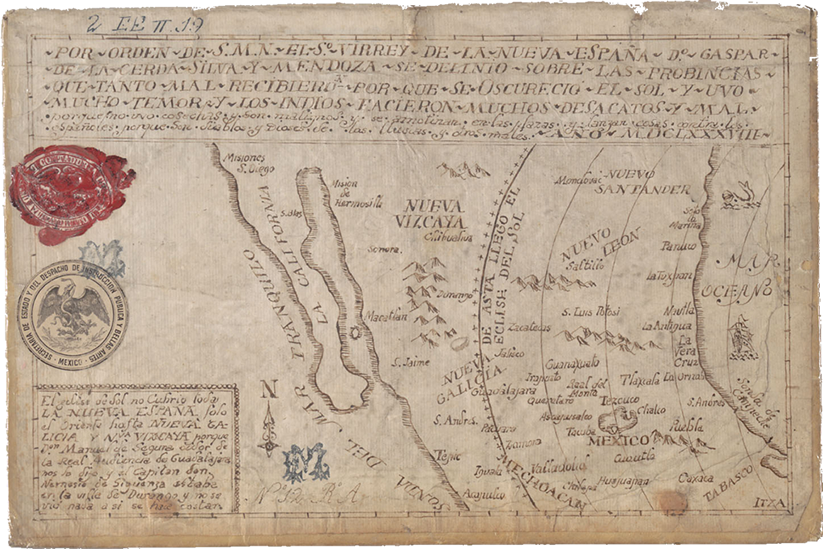 The founder was Nuño de Guzmán, a conquistador locked in a bitter power struggle with the notorious Hernán Cortés, who subjected the Aztec Empire. In order to secure the northern frontier for himself, Guzmán chartered Culiacán as a villa. According to Oakah L. Jones in Los Paisanos: Spanish settlers on the Northern Frontier of New Spain (Norman, University of Oklahoma Press, 1979), a villa was a “chartered frontier settlement with limited rights and privileges such as right to self-government; next in importance to a ciudad.” So clearly there were big plans for Culiacán. The first pobladores were 60 to 100 soldiers assigned by Guzmán. In the century after Culiacán was founded, other places important in our family history were founded: the villa of San Sebastián de Chametla, the real de minas or mining community of El Rosario, and the port pueblo of San Juan de Mazatlán.

At the beginning of the 1600s there were likely no more than 300 people in all of Sinaloa, according to Jones, who notes that censuses, or padrones, were infrequent. Around 1760, there were about 2,216 Spaniards living in Culiacán, a number and date that will suffice for our work here, although we must note that “Spaniards” were not the only ones living in the area, although they were the only ones enumerated. But we’ll get to that shortly.

Breaking Through the Wall

It was not easy locating the marriage record of Clemente Moraila and Jesus Verdugo; many records are indexed online, but others require painstaking browsing of page after page of images of illegible, disintegrating and sometimes chaotically disorganized colonial church records. That’s how I found their 1841 record in the registers of the Cathedral of San Miguel in Culiacán, which cover the period from 1690 to 1967. 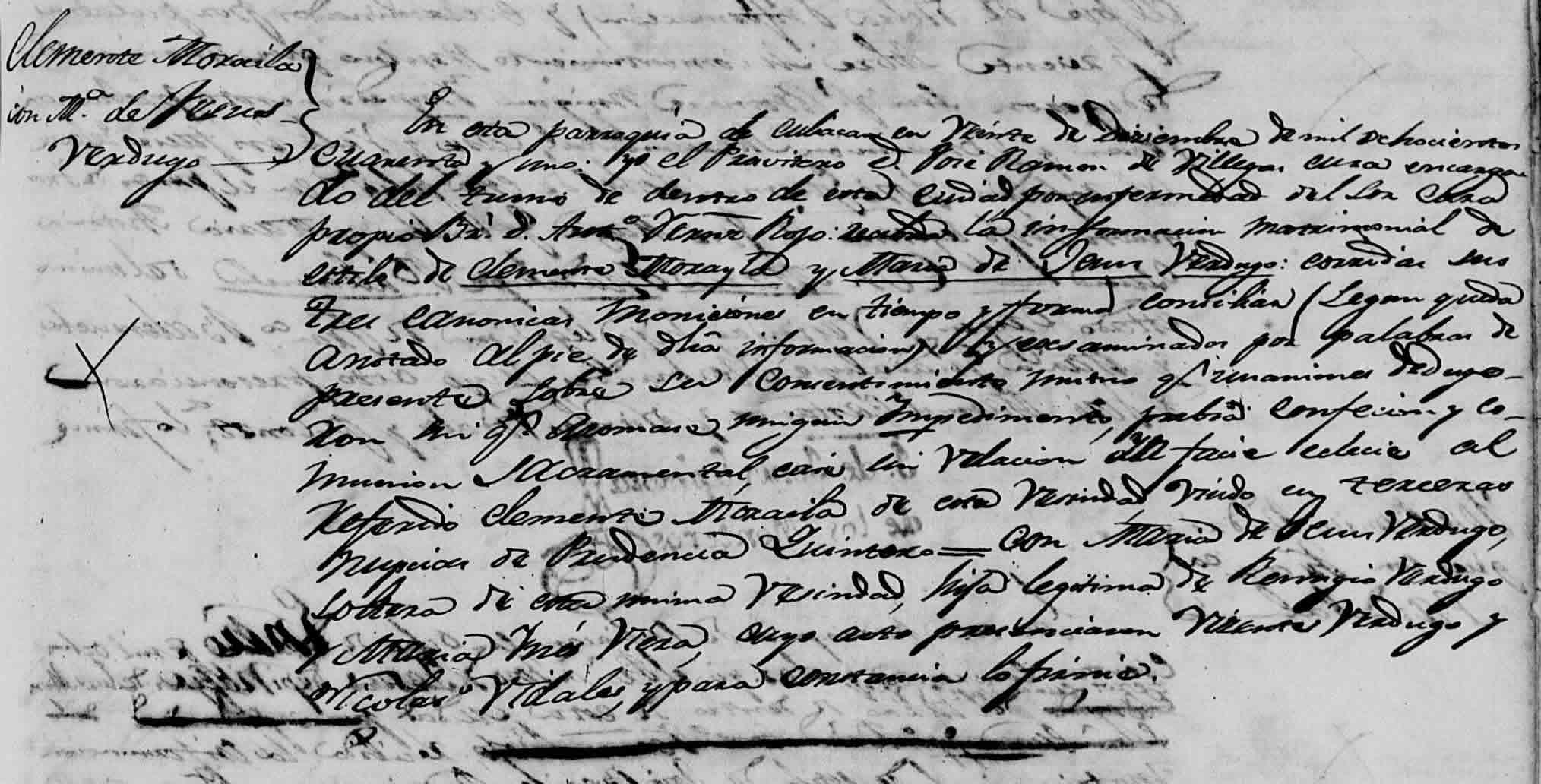 Where are the names of Clemente’s parents? But on second look, the most important words became apparent: Clemente Moraila de esta vecindad viudo en terceras nupcias de Prudencia Quintero. Clemente’s marriage to my great-great grandmother was his fourth marriage. All the other Clemente Morailas married to other women in Culiacán at the time were him! And here I won’t even get into whether he actually married a fifth woman, Josefa Sanchez, in 1878 when he would have been 74 years old.

This discovery allowed me to work my way back another 100 years to identify the apparent progenitor of the Morailas of Culiacán as Manuel Moraila, most likely born about 1720. While there were other branches of the Moraila family in Chametla (220 km/136 mi from Culiacán), El Rosario (64 km/40 mi), Mazatlán (223 km/139 mi) and Cosalá (113 km/70 mi), It appears Manuel was the patriarch of the only branch in Culiacán. Because of the size of the population at the time, they had to be one family. I began to weave together all the Morailas of Culiacán, first in theory and then more decisively as I uncovered more original records. 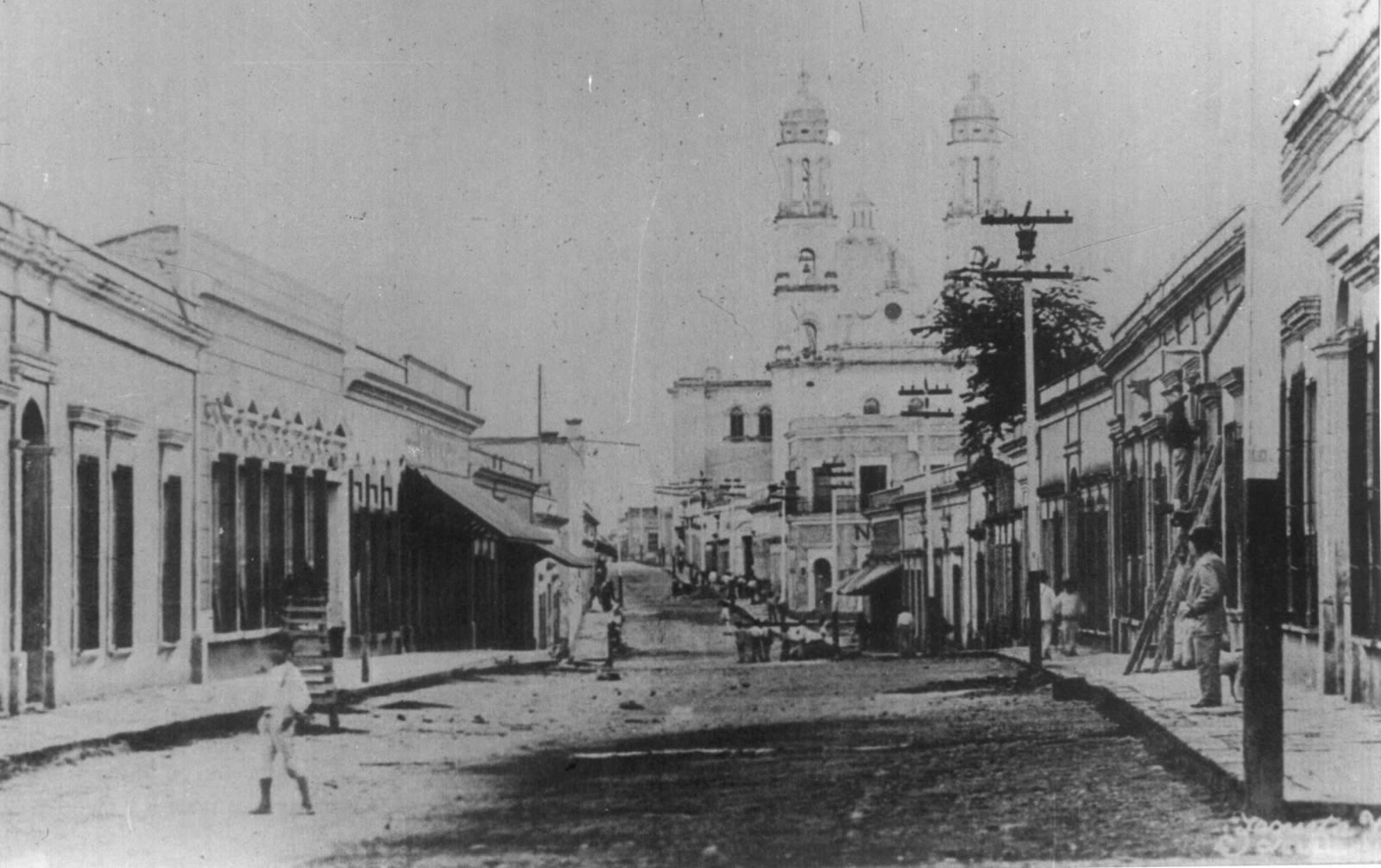 A Family Emerges from the Mist

Below are all the known members of the Moraila family of Culiacán, reunited again for the first time as assembled by me from the cathedral records. There are more details to be filled out, as I have not yet found all the original record images. You can tell those baptismal records I have not yet found, for example, because they are generally missing the birth date. It will take some time to find them all. And then there is the question of where Manuel came from. El Rosario? Cosalá? Mazatlán? Or somewhere else?

All the records from the register below are from the Registros Parroquiales de Sagrario de San Miguel except of course for other life details of the fourth generation and the potentially significant move of Juan Sesario Agustín and his wife María Ysidra Labrada to Cosalá, where their daughter was baptized in the Church of St. Ursula in 1820. 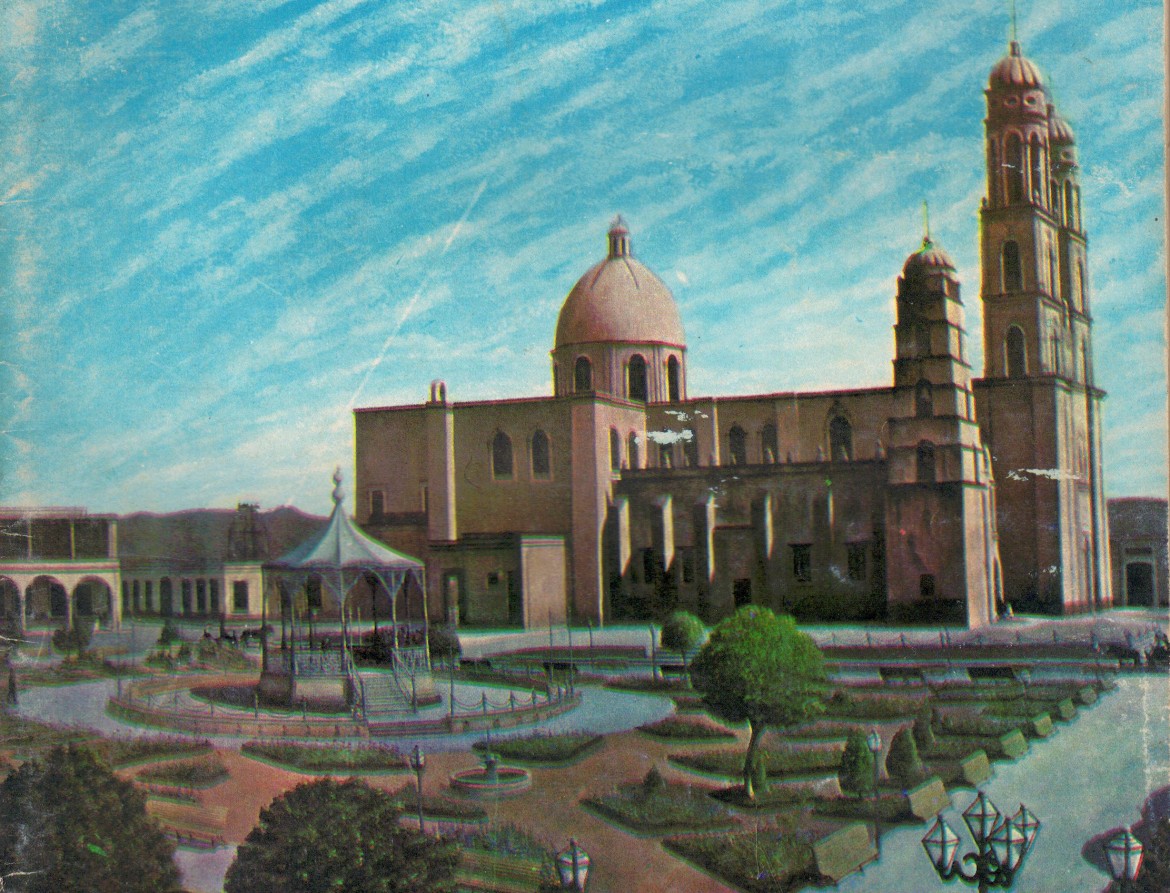 Undated photograph of the Cathedral Basilica of Our Lady of the Rosary, Culiacán, completed 1885, with previous cathedral still standing next to it 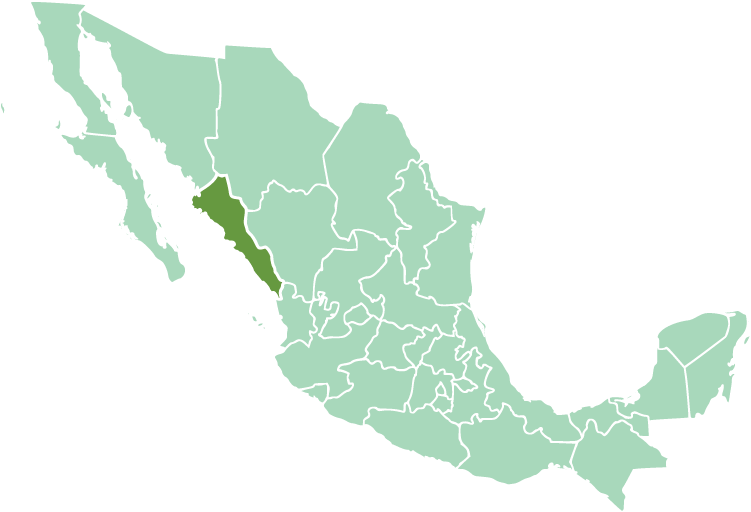 In the register above, an asterisk after a name indicates I have examined the image of the actual baptismal or marriage record and found a particular notation. Below is an example: the 1752 marriage record of Manuel Moraila and María Juana Josefa Madrigal. 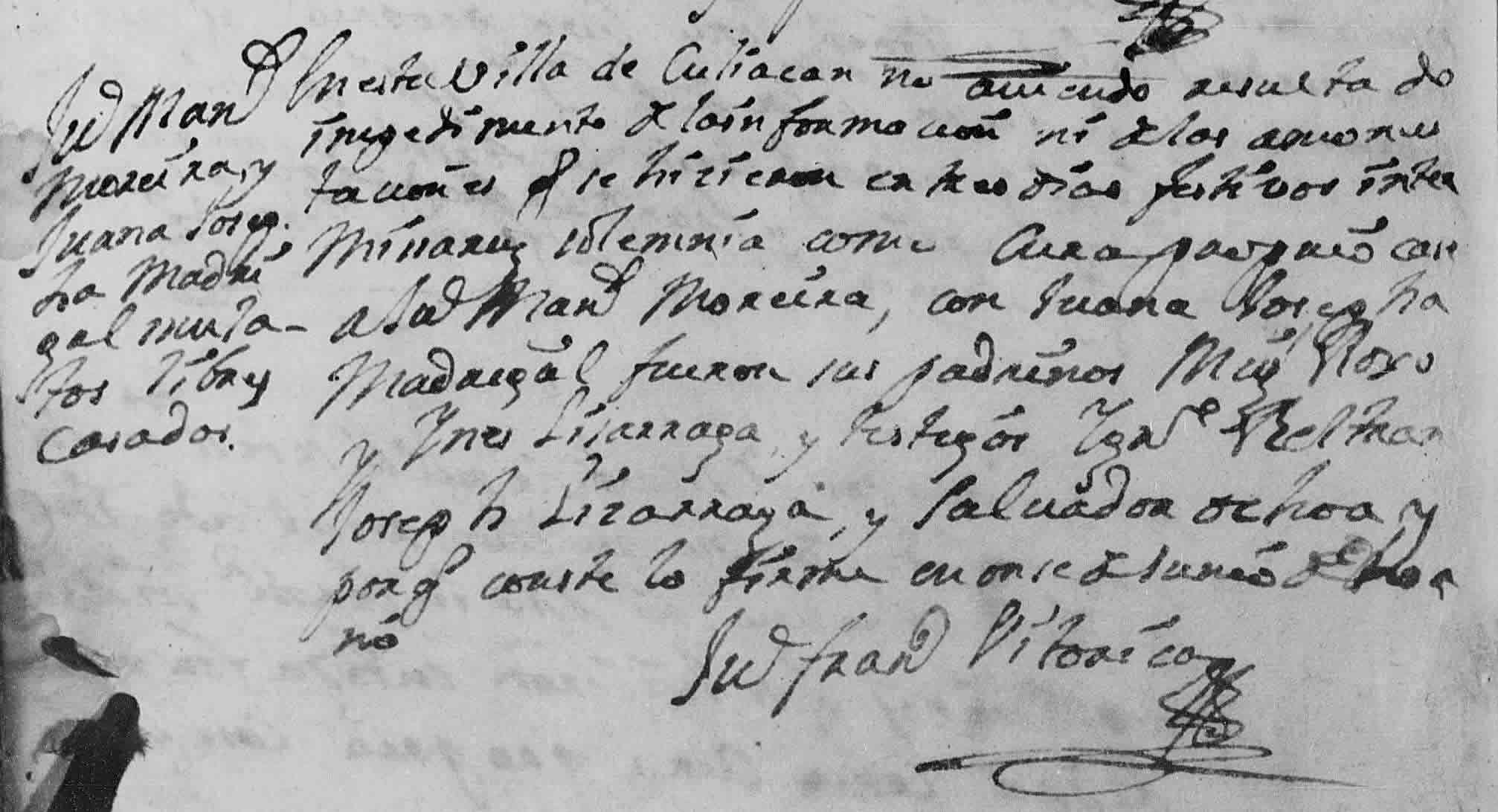 In the margin, after the names, you can see a notation that would affect their entire lives: mulatos libres. In fact, we can safely say that the entire Moraila family was composed of mulatos libres. This means they were all of mixed European and African origin; not enslaved, hence libre rather than esclavo, but still the descendants of slaves. If you want to know what my ancestors looked like, see the painting below. 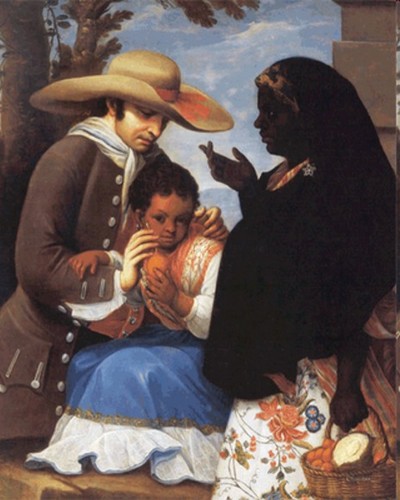 Colonial Mexican society was highly stratified along racial lines. I first encountered African heritage in our family when I discovered the Chametla baptismal record of my great-great grandmother Eugenia Tamayo. Having seen an exhibit of casta paintings at the Los Angeles County Museum of Art, I had assumed that being interracial in colonial Mexico was somewhat benign. I was wrong.

In Fire and Blood: A History of Mexico, T. R. Fehrenbach says of the casta system: “The Spanish did not create a single, brutal racial bar, but rather a system that had many hurdles and doors. They believed in the theory of ‘dominant blood.’ The Spanish broke people of mixed blood down into many different categories and gave them a certain hierarchy of status according to predominant white, Amerindian and African genes.”

As a result, there existed social and legal limits on those who were not of European descent. While not exactly apartheid or Jim Crow, Spanish colonial society had mechanisms to keep non-Europeans impoverished by a higher rate of taxation and exclusion from professions and trades.

For the Spanish, there were three races:

Beneath these three races in the Spanish worldview were those who intermarried. While the lack of European women cased the Spaniards to intermarry or simply to select women of other races as casual partners (the more frequent choice, according to Fehrenbach), the Spaniards in turn made the offspring of those unions shameful, and oppressed their own children.

So those children of interracial unions were called castas. By later interbreeding with “pure” españoles their children could eventually achieve “purity of blood” and become “Spanish.” But if they continued to marry among their own kind, as in the case of the Moraila family, mulatto marrying mulatto, their children would always be mulatto; it was not just skin color that decided one’s fate, but a whole variety of aspects, mostly self-fulfilling prophecies.

There were outs. Stories exist of those who bought or fought (through military service) their way out of casta status to become officially españoles on paper. Some shed their status through pioneering the dangerous frontier. Some even became dons and doñas. That was rare, but we don’t know if our ancestors crossed that river.

The Spanish had an elaborate genetic hierarchy of the castas. There are various systems described, but Fehrenbach’s tables below are typical. Church records were not so nuanced; the priest would decide the casta—sometimes rather arbitrarily—and in records I have only seen español, indio, mulatto, mestizo, coyote, and lobo. Presumably by the time of our family in Culiacán there were few pure Africans.

Castas of Españoles (Criolles or Peninsulares)

From around the time of the birth of the family patriarch Manuel Moraila, casta paintings became very popular. This genre was characterized by sets of paintings, usually 16, that depicted the various interracial couples and children of New Spain. According to Ilona Katzew (Casta Paintings, New Haven, Yale University Press, 2005), “The production of casta painting reached its apex in the second half of the eighteenth century, coinciding with the implementation of the Bourbon reforms. Most extant sets were painted between 1760 and 1790.”

Miguel Cabrera, one of the key casta painters, used the following 16 classifications in his works, which may be more familiar than the above classifications: 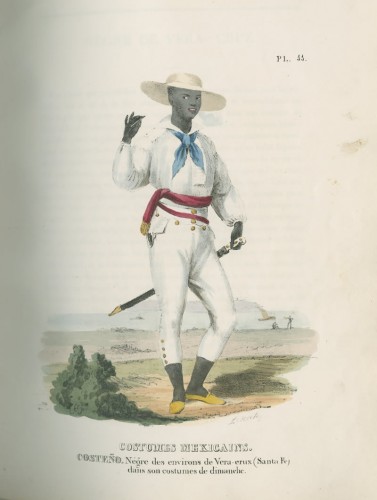 Person from the Coast. Negro from the Area of Vera-Cruz (Santa Fe) in Sunday Dress, Claudio Linati. From Costumes et moeurs de Mexique [Dress and Customs of Mexico], 1830

In fact, in the cathedral records of the Moraila family we see less attention paid to including race or casta in church records as the generations progress. Ultimately, the system, already dying, would end with the Mexican Revolution and split from Spain in 1821. By the time Clemente and María de Jesús were married, racial classifications no longer appeared on official records. The oppressive casta system, so defining for our ancestors and so crucial to their Spanish overlords, would be forgotten by their descendants and the world.